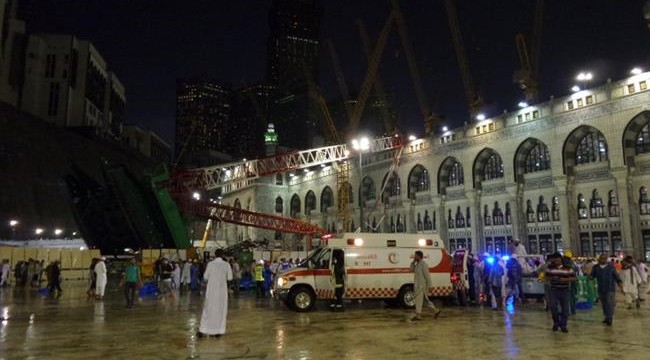 Saudi Arabia has started court trials for 14 people suspected of malpractice that led to a deadly crane crash in the holy city of Mecca last year.

The massive construction crane collapsed into Mecca’s Grand Mosque last September, killing more than 100 pilgrims and injuring over 200 others during Hajj rituals.

Those standing in the dock at the trial are accused of “negligence leading to death, damaging public property, and ignoring safety guidelines,” Saudi media reported.

The defendants include at least one Saudi “billionaire,” nationals from several other Arab countries, and other individuals from Pakistan, the Philippines, and Canada.

The billionaire is likely to belong to the Saudi Binladin Group construction behemoth, which had installed the crane.

The suspects denied the charges against them, insisting that the crane collapse was caused by rough weather. The court ordered a new session for next month.

According to the figures released by Iran’s Hajj and Pilgrimage Organization, 11 Iranian pilgrims were among those killed in the crane collapse. Another 32 Iranians were injured in the incident.

However, the crane crash was just a case in a litany of catastrophic Hajj disasters which have claimed the lives of many hundreds in Saudi Arabia in recent years.

Days after the crash, at least 465 more Iranian pilgrims lost their lives during a deadly crush, which occurred after two large masses of pilgrims converged at a crossroads in Mina near Mecca during the Hajj rituals.

Saudi Arabia put the initial death toll at 770 but refused to update it, which further fueled accusations of catastrophic mismanagement of the Hajj rituals by the regime.

The Associated Press and several other news agencies counted more than 2,200 fatalities. Iran says a total of about 4,700 people lost their lives in the incident.

The kingdom’s handling of the disaster aggravated already strained relations with Iran. For weeks, Saudi authorities refused to provide information about the fate of many missing pilgrims and rejected Iran’s offer to help with the identification of the victims.

At one point, Iran had to issue a stark warning after Saudi officials suggested to bury the dead in the kingdom.

In April, Iran canceled its participation in this year’s holy pilgrimage to Mecca after Saudi authorities refused to guarantee the safety of pilgrims and created a raft of “obstacles” instead, according to Iranian officials.

Head of Iran’s Hajj and Pilgrimage Organization Saeed Ohadi said Saudi officials were afraid of undisclosed dimensions of the deadly stampede coming to light. He said the fate of those affected from different countries still remained unclear more than 10 months after the disaster.

Iran, Ohadi said, was the only country that managed to determine the fate of its nationals either dead or missing, thanks to the “firm remarks” of Leader of the Islamic Revolution Ayatollah Seyyed Ali Khamenei after the disaster.

Ohadi said Riyadh had adopted a “wrong approach” both prior to the incident and after it.

In 1987, Saudi security forces attacked Iranian pilgrims attending a ‘disavowal of infidels rally’ – an annual demonstration against the US and Israel – in Mecca, leading to a massacre in which more than 400 people were killed.