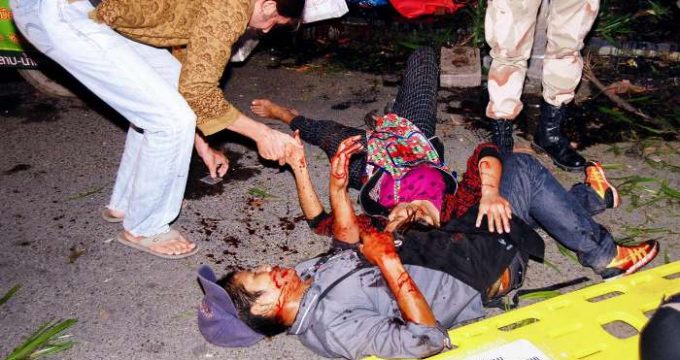 A string of bomb attacks have left at least four people dead and over 20 others injured across Thailand, security sources say.

According to local Thai police officials, the casualties came after nine powerful bomb explosions rattled the resort town of Hua Hin and the southern provinces of Trang and Surat Thani over the past 24 hours.

There are several foreigners among those wounded in the attacks.

Four people have been confirmed killed in the blasts — two in Hua Hin, one in Surat Thani and another in Trang.

There were also similar explosions in the tourist island of Phuket.

Police say they have no information about the motives behind the attacks or the identities of the bombers.

Thailand’s junta chief Prayut Chan-O-Cha on Friday called the bombings an attempt to trigger unrest in a country blighted by a decade-long political crisis.

“The bombs are an attempt to create chaos and confusion,” the junta chief told reporters in Bangkok, adding, “Why have the bombs occurred as our country is heading towards stability, a better economy and tourism — and who did it? You have to find out.”

The blasts come ahead of a national holiday marking the birthday of Queen Sirikit and just before the anniversary of a blast in downtown Bangkok last August that killed 20 people, mainly ethnic Chinese tourists, in the deadliest such attack to hit the country in recent years.

The developments also come days after voters in Thailand overwhelmingly approved a junta-proposed draft constitution in a referendum that would lay the foundation for a civilian government influenced by the military.

The referendum paves the way for a general election in 2017 but requires future governments to rule on the military’s terms.

The military rulers, who came to power in 2014, abolished the previous constitution and set up a committee to draft a new one.

Thailand’s major political parties have rejected the new constitution, saying it is undemocratic and will entrench military control.

The chronic instability and political division have haunted Thailand’s modern history. During the past decade, power has been shifting between a royalist army and its establishment allies on one side and elected governments led by or linked to self-exiled billionaire, Thaksin Shinawatra, on the other.