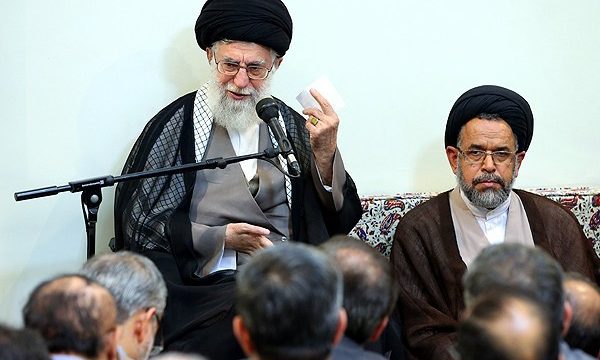 In a meeting with senior Intelligence Ministry officials in Tehran on Tuesday, Ayatollah Khamenei described the ministry as the “Establishment’s hard armor” that should not sustain any damage at all.

The Leader also praised the intelligence forces as the Islamic Establishment’s sharp eyes, stressing that the Revolution’s principles should be fully respected by the ministry.

Highlighting the great potential of the Intelligence Ministry to tap into the capacities of young, pious and revolutionary forces, Imam Khamenei stressed that the new generation of the ministry’s personnel should be trained in accordance with the revolutionary values, just as before.

The Leader also emphasized the necessity for commitment to the fundamentals of the Islamic Revolution set by late Imam Khomeini, including the adoption of a distinct path from that of the “spearhead of the arrogance current, namely the US.”

Ayatollah Khamenei then urged the Intelligence Ministry’s active presence in any area that the enemy might use to attack the Islamic Establishment.

The leader finally stressed the role that the Intelligence Ministry can play in averting economic corruption and in helping implement the Resistance Economy grand plan.