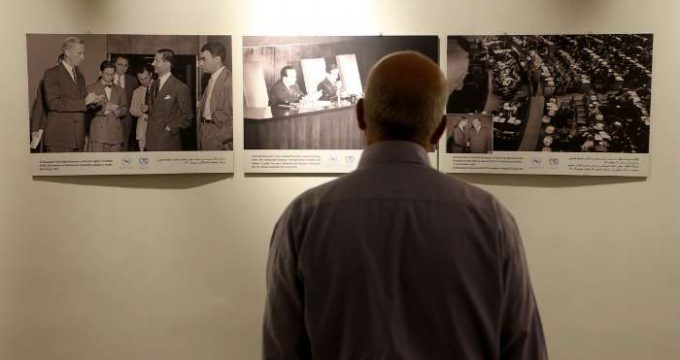 On 7 August, the Islamic Republic Agency (IRNA) and UNIC mounted a display of historical photos and documents depicting the history of Iran’s relationship with the United Nations at the House of Artists in downtown Tehran.

“This is a very good initiative by the Islamic Republic News Agency and the United Nations Information Centre to organize this exhibition which exhibits 70 years of ups and downs between the United Nations and Iran” said Iran’s Deputy Foreign Minister Dr. Abbas Araghchi at the inauguration ceremony of the UN-Iran Partnership Historic Photos and Documents Exhibition.

Dr. Araghchi added: “These photos are as a result of hard works of photojournalists.  Thus it is very meaningful to have the inauguration ceremony on the National Journalists Day.  I am so glad to be among you today.”

Importantly, he noted: “We at the Foreign Ministry are fully prepared to expand our cooperation with the United Nations in all fields – especially in regard to the Sustainable Development Goals

The exhibition includes some unique photographs and documents from the time Iran became member of League of Nations, past its becoming a member of the United Nations and onwards.

The event was timed to coincide with National Journalist Day in Iran.  This day focuses especially on those who have fallen in the line of duty while reporting on various conflicts.  Mr. Lewis took the opportunity to recognize the efforts of journalists over the world and made specific reference to Iranian journalist, Mr. Mahmoud Saremi, who had been executed in 1998 in Afghanistan when the Taliban stormed the Iranian consulate in the northern town of Mazar-i-Sharif.

Mr. Lewis remarked that he had been working in Afghanistan at that time for the UN Office on Drugs and Crime and the news came as a shock to many in the diplomatic community.

Among attendees at the inauguration ceremony on Sunday were over 80 diplomats, NGO members, journalists along with UN officials including UNIC Director in Iran, Ms. Maria Dotsenko and her team.

Mr. Lewis added: “I believe this gathering affords us an opportunity to really share with you how the United Nations is here in Iran to support its member state and always will be.  We take this responsibility very seriously.  So, as we look to the past – with these photographs – let us also be thinking about how we can build on that relationship into the future.”

He then focused on the theme of human development and how Iran, and the region, needed to focus on delivering the Sustainable Development Goals.

A group of Iranian artists including Rakhshan Banietemad (bottom left) and Reza Fayazi (bottom middle), former members of the parliament (top left) alongside some tourists visited the exhibition

IRNA Managing Director, Mr. Mohammad Khoddadi told the audience that as human beings we all share values of peace, friendship, love and sincerity.  He added that sustainability is based on peace and not war and IRNA and UN are active to promote peace.

Mr. Sina Saremi (left), son of journalist Mr. Mahmoud Saremi, who was executed by the Taliban in 1998 in Afghanistan, was awarded a memento memorializing his father during the inauguration ceremony