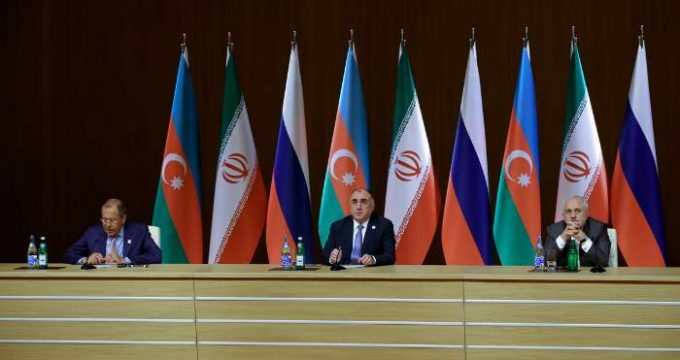 Following the trilateral meeting of Hassan Rouhani, Vladimir Putin and Ilham Aliyev on Monday, the foreign ministers of the three countries Mohammad Javad Zarif, Elmar Mammadyarov and Sergei Lavrov held a joint press conference about the outcomes and results of Baku meeting on Monday night.

Russia’s Lavrov said the negotiations among Russia, Azerbaijan and Iran would help further cooperation and close their positions on issues.

He added the officials of various institutions of the three countries will hold meeting next year to examine the ways for the implementation of projects.

Iranian Foreign Minister Mohammad Javad Zarif, for his part, said the statement signed among the presidents of Russia, Azerbaijan and Iran would give more mobility to interactions among the three countries.

Zarif explained that President Rouhani had proposed to hold the next ministerial and summit meetings among the three countries in Iran.

He underlined that Iran, Russia and Azerbaijan would expand and develop cooperation and interaction in energy, transportation, tourism, business, customs and other economic areas.