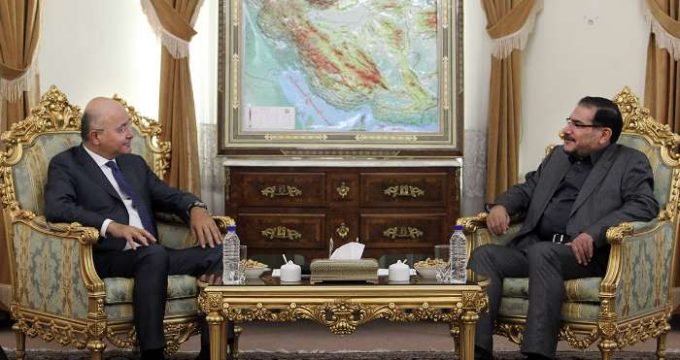 “Annihilation of the ISIL in Iraq is an important contributor to the establishment of integrity and strengthening of national identity and certain foreign parties and regional countries don’t want this issue (ISIL terrorism) to be resolved and, hence, maintain the grounds and thoughts which have created the ISIL,” Shamkhani said in a meeting with Deputy Head of the Patriotic Union of Kurdistan (PUK) Party and former Iraqi deputy prime minister Barham Salih in Tehran on Tuesday.

Noting that Iraq’s strategic interests and its regional power can be materialized merely by strengthening integrity and unity in the country, he said, “Growing integrity and brotherhood among the Kurdish groups for active partnership in the united Iraq’s political and economic structure is an inalienable policy of the Islamic Republic of Iran.”

Salih, for his part, appreciated Tehran’s constructive role in the fight against terrorism and its support for the Iraqi people to establish stability and security, and said, “We see the Islamic Republic of Iran as our strategic ally.”

In relevant remarks in July, Iran’s Ambassador and Permanent Representative to the United Nations Gholamali Khoshrou in a statement blasted certain countries for their double-standard approach to terrorism, adding that categorizing terrorists as good and bad doesn’t help uproot the ominous phenomenon.

“We must recognize that selective or double standards and simply categorizing good and bad terrorism based on the short term political interests would not help us to uproot terrorism. Such wrong approaches could only undermine international trust and cooperation in countering terrorism,” Khoshrou said, addressing a UN General Assembly meeting on the fifth biannual review of “the Global Counter-Terrorism Strategy”.

“The international community should have a unified approach in fighting this scourge in an indiscriminate manner.  As we have successfully accomplished the fifth biennial review of the Strategy these days, we must carefully follow national, regional and global plans to implement the Strategy in a comprehensive way, with the cooperation of all, in a balanced manner, with sufficient attention to the conditions conducive to the spread of terrorism while avoiding double standards and discrimination for better and lasting results,” he added.