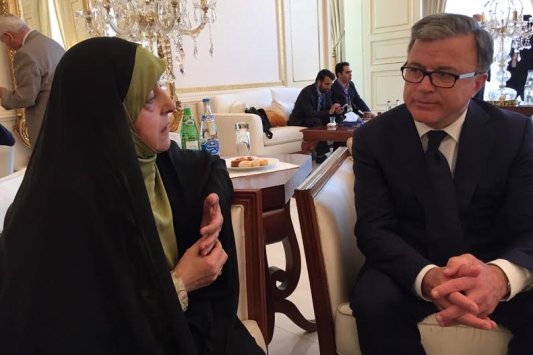 BAKU, Aug. 08 (MNA) – Iran’s head of Department of Environment has discussed with his Azeri counterpart joint application of Hirkani forests of the Caspian Sea for registration in UNESCO World Heritage Site.

Masoumeh Ebtekar who is among President Rouhani’s entourage in his Baku visit, met on Monday with Ministry of Ecology and Natural Resources of Republic of Azerbaijan Huseingulu Bagirov. Both sides highlighted environmental cooperation.

Mrs. Ebtekar told the meeting that with Tehran Convention entering into action and Caspian Sea littoral countries’ shift of environmental priorities, a new bilateral agreement should be signed to centralize environmental issues; the proposal was hailed by Azeri side and both officials agreed that an MoU be signed to address more seriously pollution in Caspian Sea and systematic curbing of by-products release from oil activities in the Sea.

The meeting also addressed joint application of Iran and Republic of Azerbaijan of Hirkani forests which are stretched both sides of the borders in UNESCO World Heritage Site in the 2016 UNESCO meeting. Pollution coming from exploratory activities in the sea bed of oil reserves especially oil spill in the surface should be addressed according to Tehran Convention and was a topic of discussion as well.