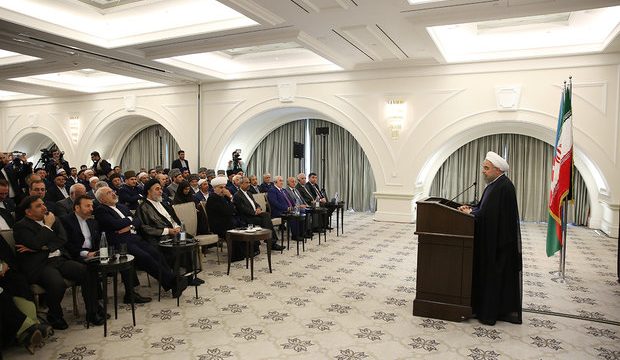 BAKU, Aug. 08 (MNA) – Iran’s President Hassan Rouhani said acts of terrorism committed in the name of Islam are a plot aimed at spreading anti-Islamic sentiments throughout the world.

President Rouhani made the remark in a friendly meeting with a number of religious figures and scholars of the Republic of Azerbaijan on Sunday in Baku, dubbing common religion and culture as source of trust and cooperation between Tehran and Baku.

Rouhani strongly denounced terror acts committed by terrorist groups in the name of Islam, adding “regrettably, the enemies of Islam have pitted Muslims against one another by arming a group of murderers and terrorists who operate exploiting the name of Islam.”

He went on to add, “we must not allow this to happen, that when others are living in peace and prosperity, Muslims be engaged in fight against each other; we must not allow disparity and slaughter to escalate, and the Muslim youths to deviate from the path of virtue.”

Rouhani stressed, “the Islamic Republic of Iran has always put the principles of moderate Islam into practice and promoted it. Islam is the religion of moderation, justice and kindness and will always extend a helping hand to all Muslims and the oppressed.”

The President further referred to the terrorist attacks carried out by the ISIL against the innocent people of Iraq, adding “from the very first day, Iran rushed to help the Iraqi people and did not allow Baghdad and Erbil to fall into the hands of terrorists. Anytime Muslims who have become trapped in the clutches of terrorism ask for our help, we will not hesitate to assist them because we deem it our duty to free the Islamic world from this scourge.”

Noting respect for territorial integrity of all countries and unchanged geographic boundaries of the region as Iran’s foreign Policy, Rouhani maintained that failure to heed this principle will bring further insecurity, instability and slaughter to the region. “We, by no means, wish to see any innocent human being be killed in any part of the world,” Rouhani stressed. “We are pushing for peace, amity, and security in the world.”

The President further deemed the root cause of problems facing the Islamic world today the interventions by the enemies of Islam, saying “the enemies provoke a group of people to wage war against Muslims in the name of religion and Jihad. They attempt to defame the reputation of Islam by sowing discord among Muslims and killing the innocent.”