Almost all newspapers on Sunday covered the national Journalists’ Day and the remarks made by various government officials in praise of the role of reporters and journalists.

They also highlighted the trilateral meeting due to be held between Iran’s President Hassan Rouhani and his Russian and Azeri counterparts in Baku.

The opening ceremony of Rio 2016 Olympics and the parade of Team Iran also received great attention.

3- Zarif to Head Economic Delegation in Visit to Latin America 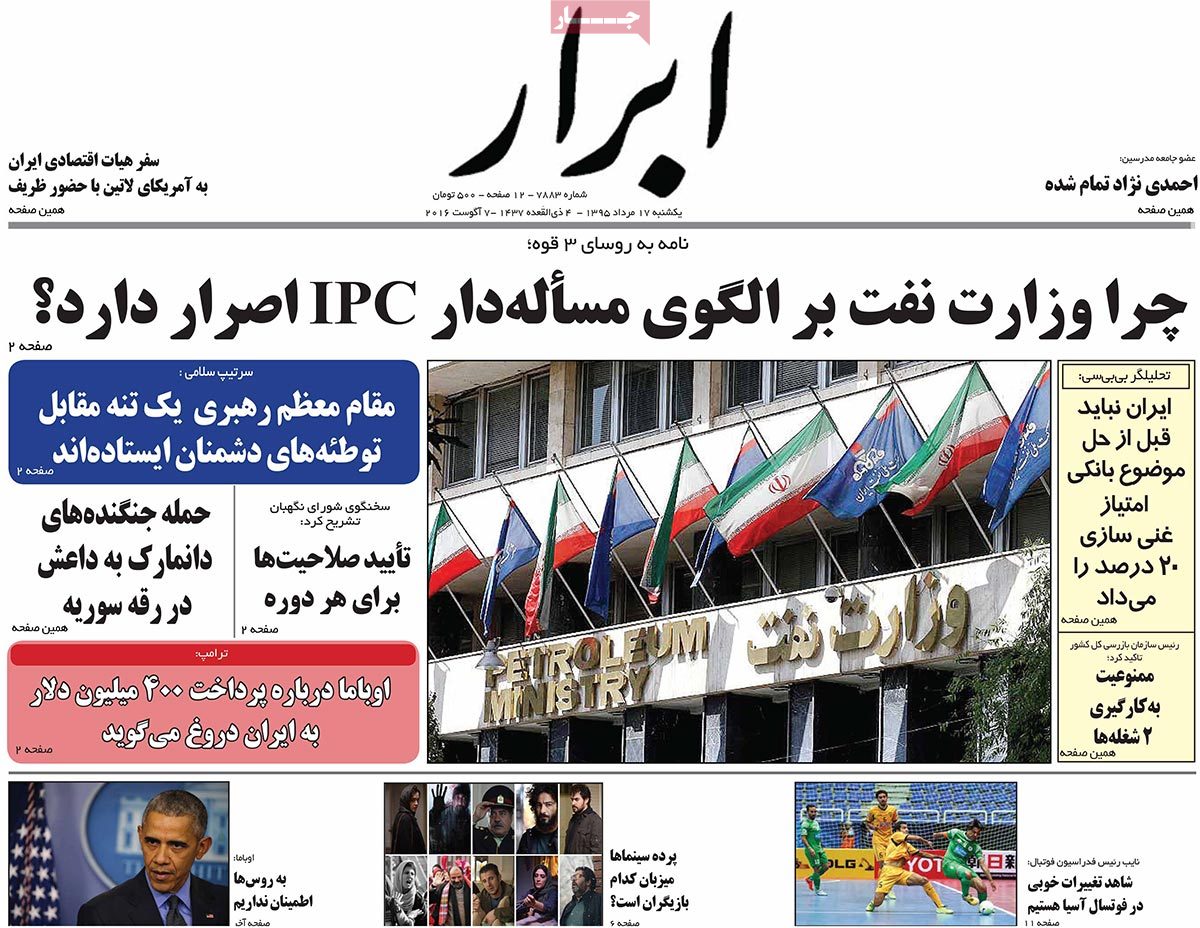 2- We Talk in Swiss Style, But Behave Like Africans: Cleric

3- Ahmadinejad Has 6 Cases in the Parliament: Reformist Politician 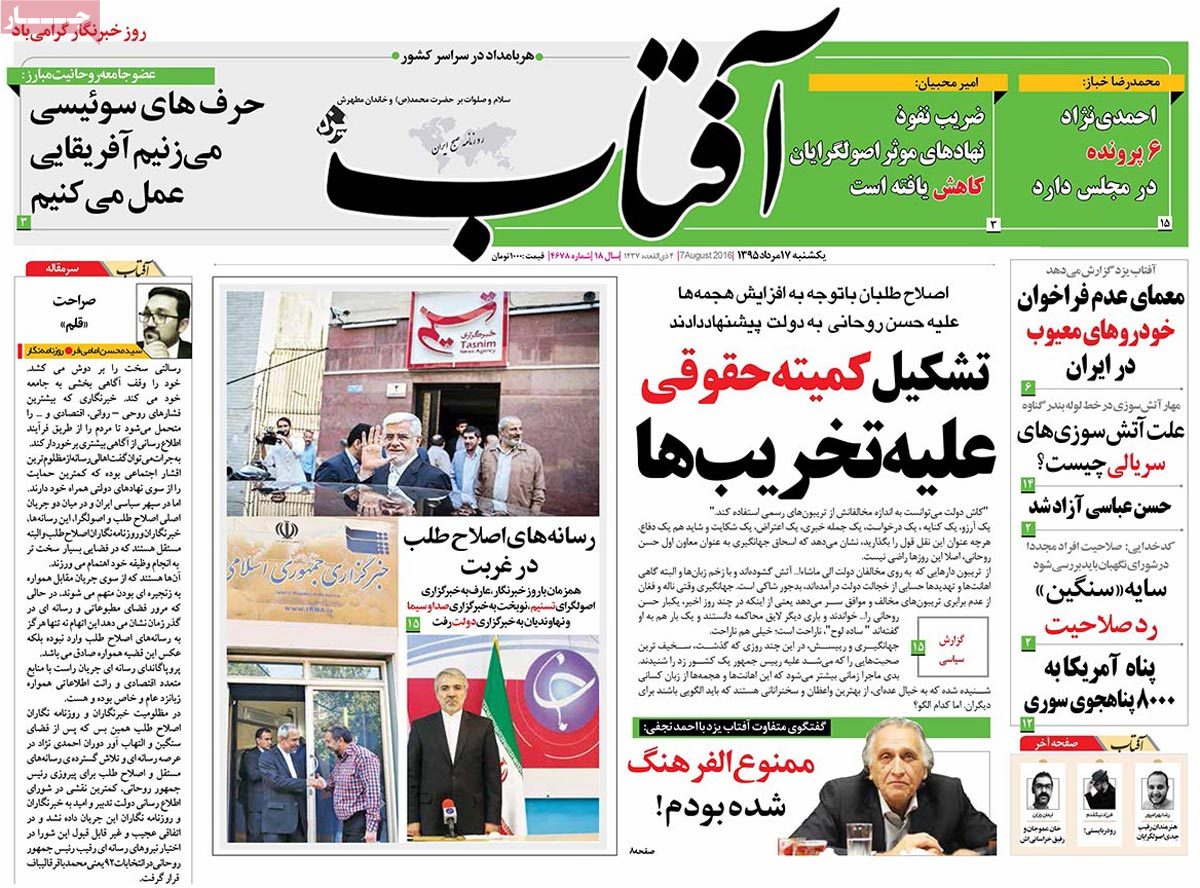 2- Payment of Money for Export of Gas! New $250m Trouble Caused by Ahmadinejad 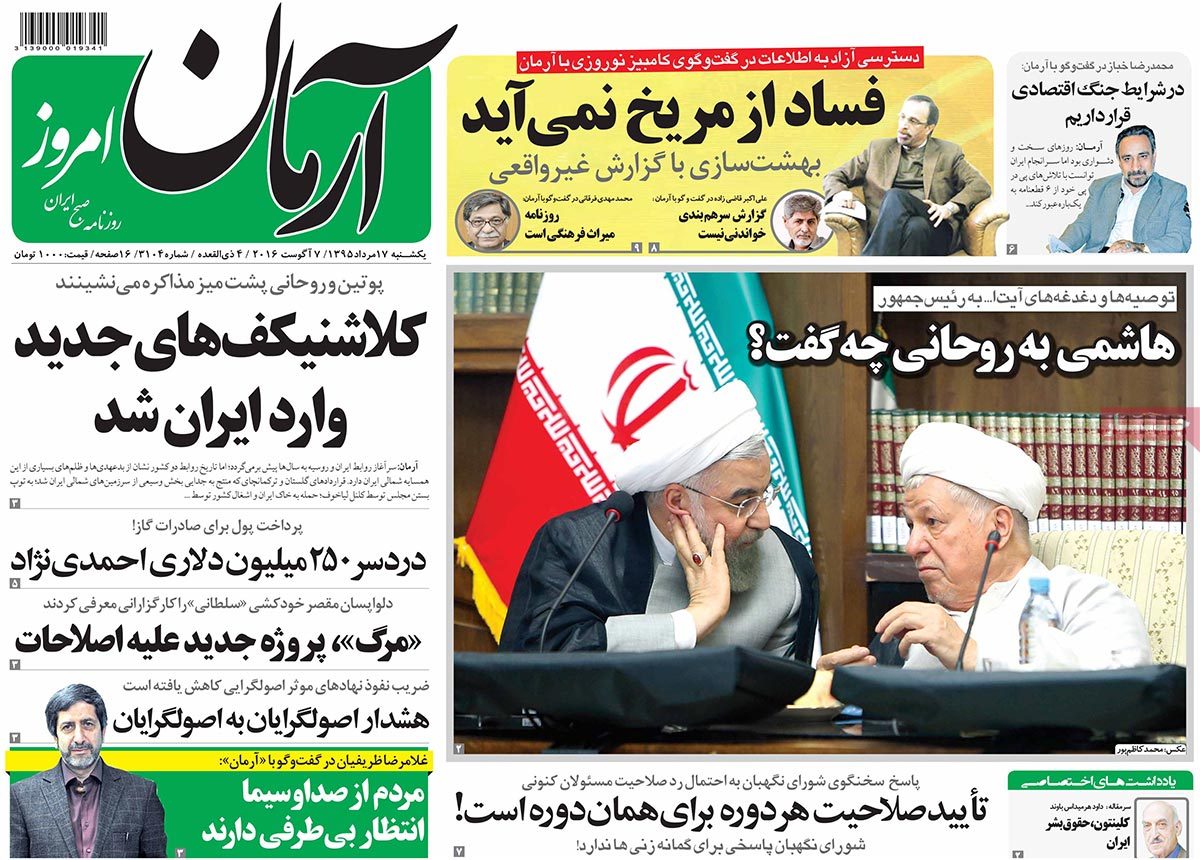 1- Attacks against President Rouhani Are Unprecedented in Iran’s History; Government Doesn’t Have as Many Official Tribunes as Its Opponents: First VP

2- Moderates Don’t Use Lies and Swear Words in Response to Radical Attacks: Rouhani’s Chief of Staff

4- Problems of Reporters in Iran Are Fundamental: Vice-Speaker

5- On Giving Permissions to Concerts, We Act Based on Leader’s Fatwa: Culture Minister

6- Opposition of Police to Fashion Shows 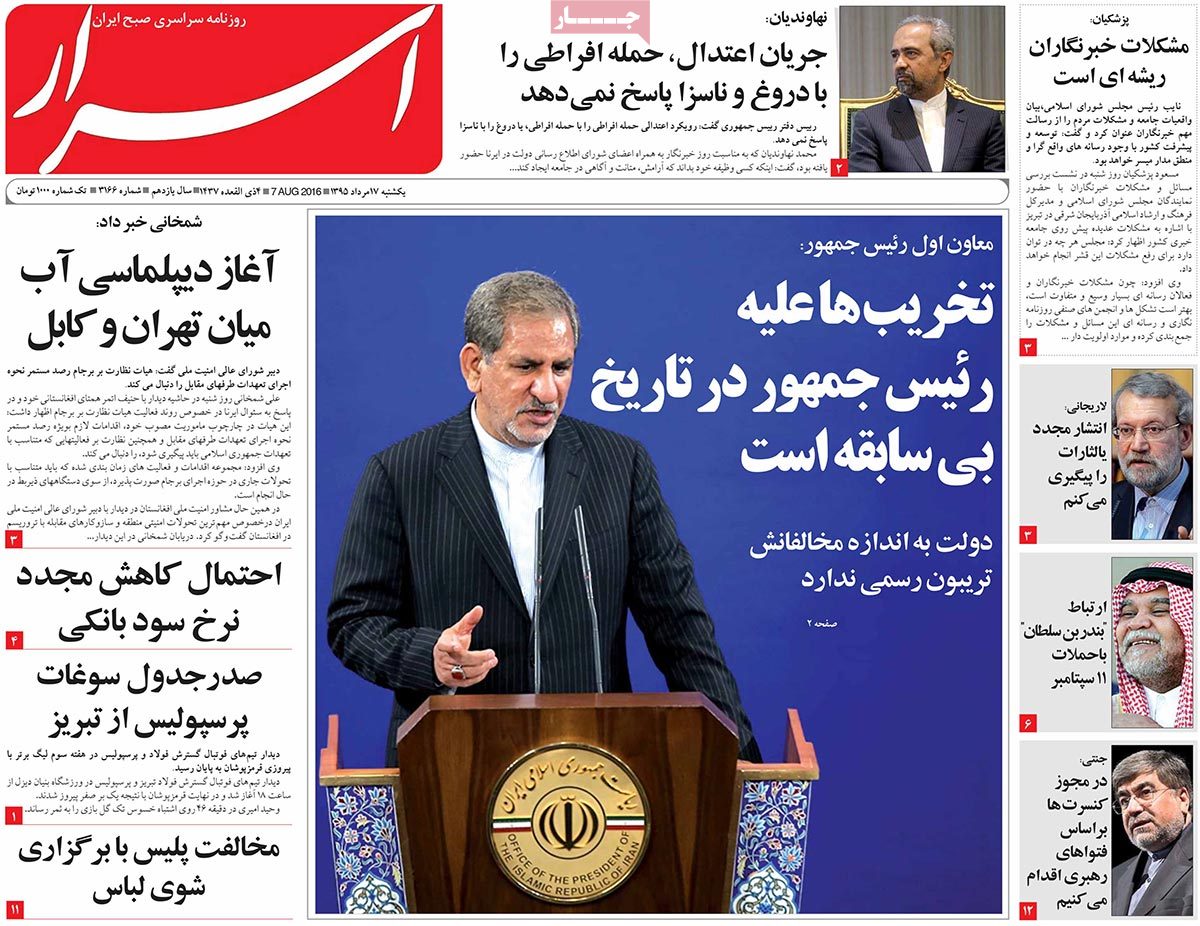 1- Some Want to Imply that Investment in Iran Is Risky; Stonewalling in Favour of Enemies 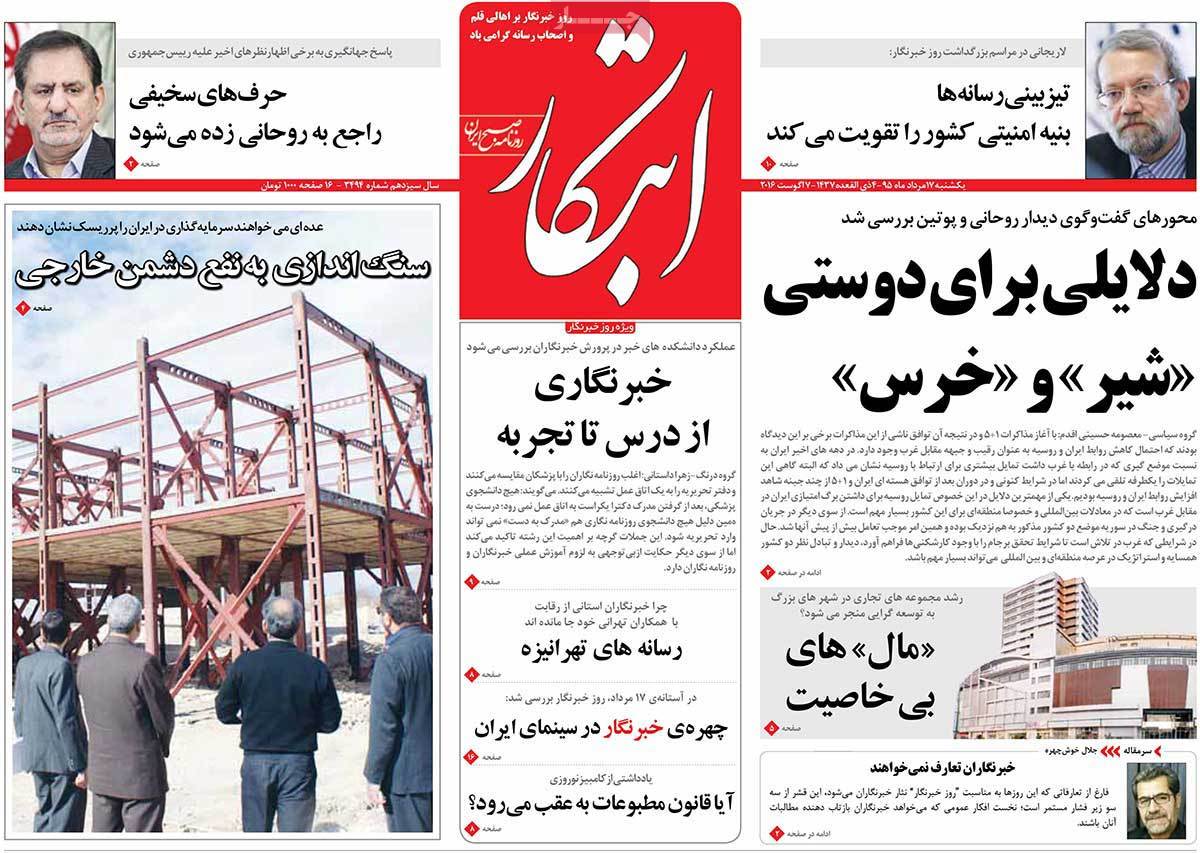 1- Deputy Oil Minister on Case of Babak Zanjani: No One Knows Where the Money Is

2- We Should both Criticize and Appreciate Rouhani: Sociologist

4- A Report on People’s Interest in Reading Newspapers: Day of Journalists without Audience 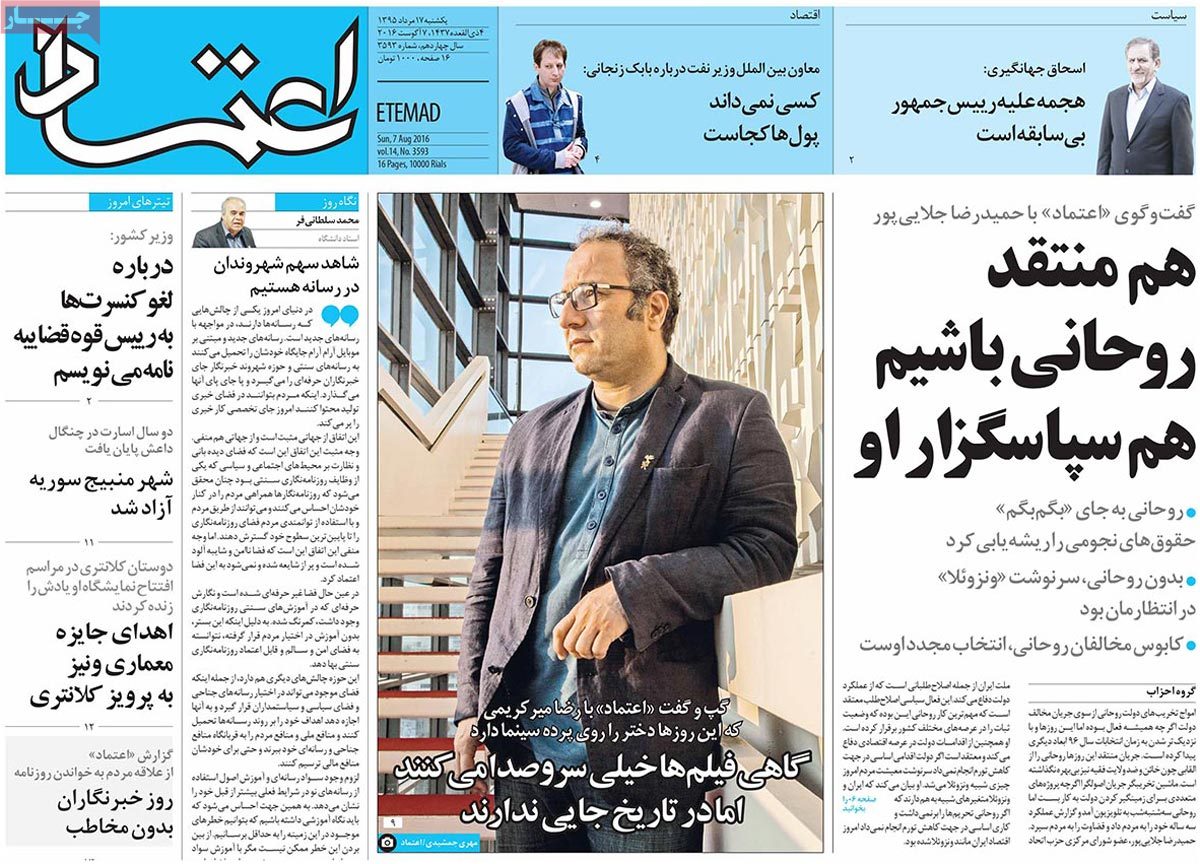 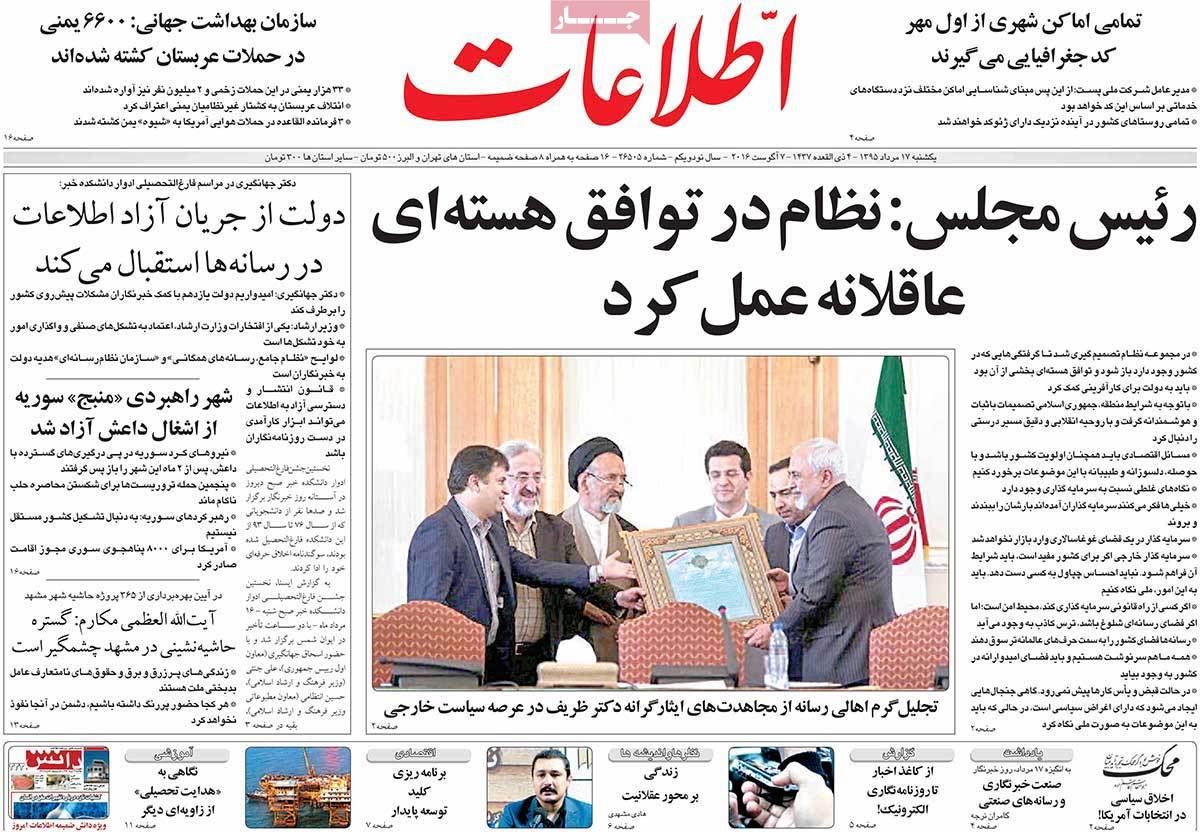 2- Filtering of Pornographic Websites Not against Human Rights: Iran’s Prosecutor-General in Reaction to UNHRC 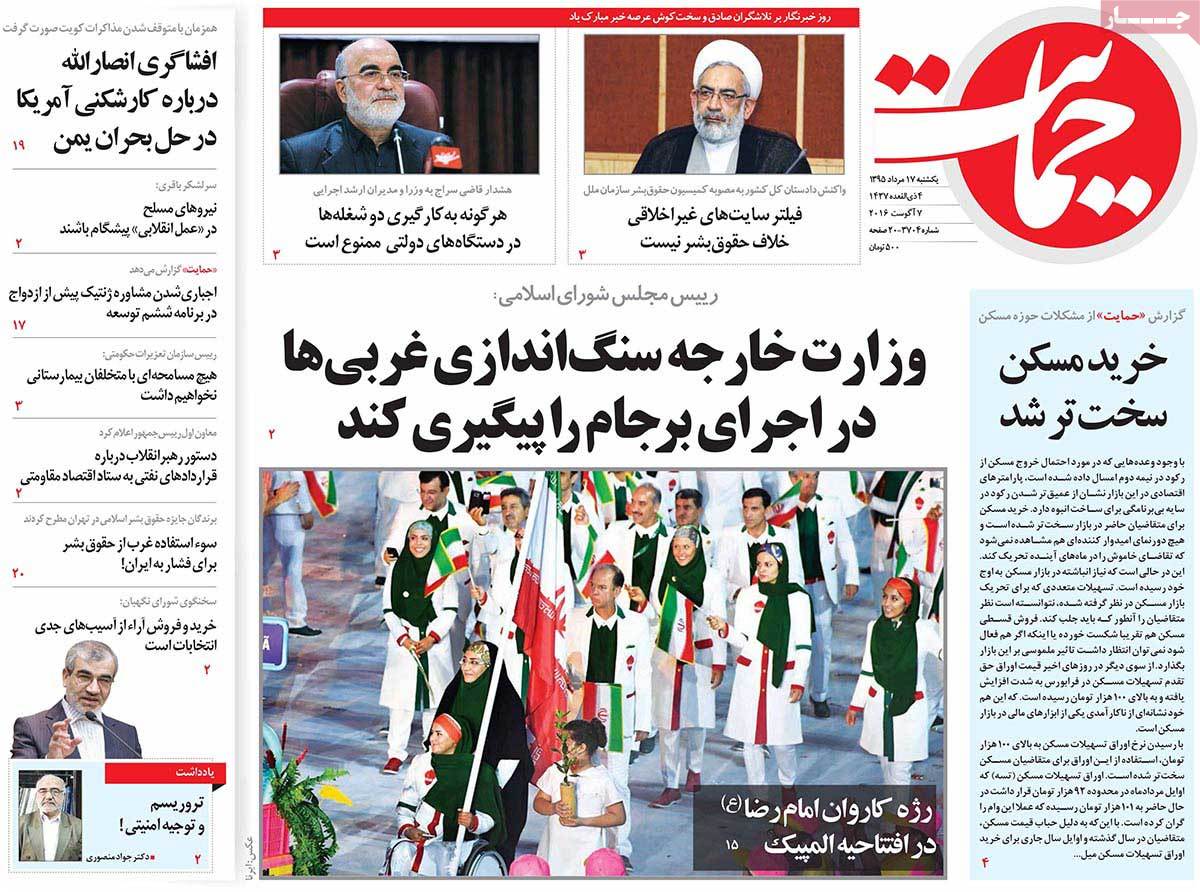 3- Give Logical Responses Even to Harshest Criticisms: Rouhani’s Chief of Staff to Reporters 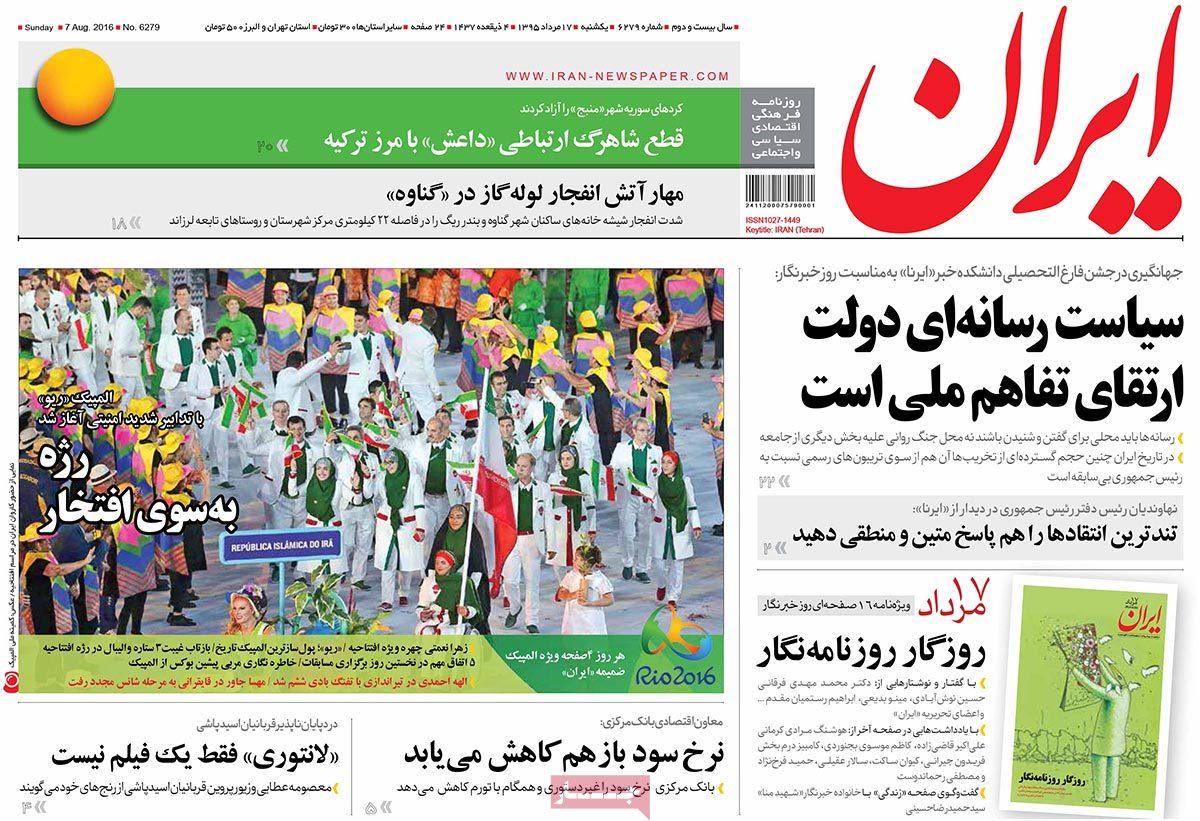 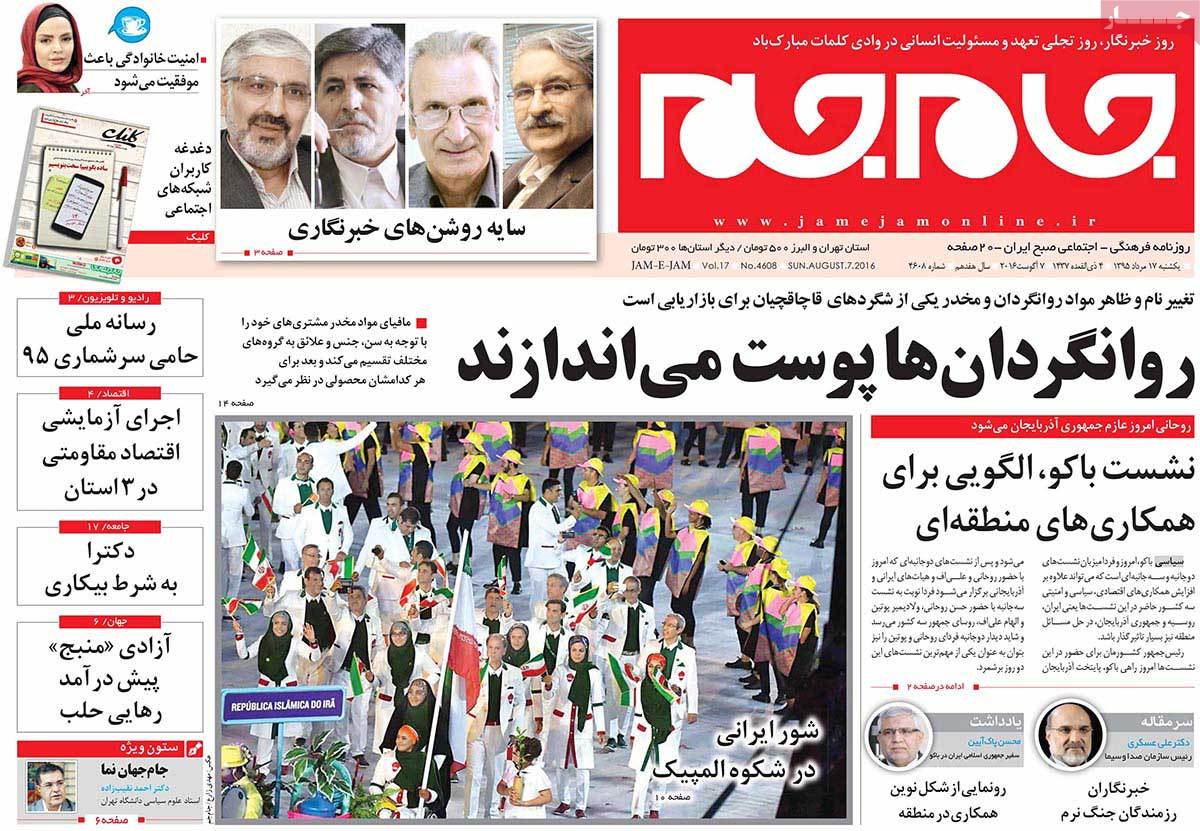 1- Obama’s Remarks When Aleppo Is Fully Surrounded: Syria Is Turning My Hair Grey 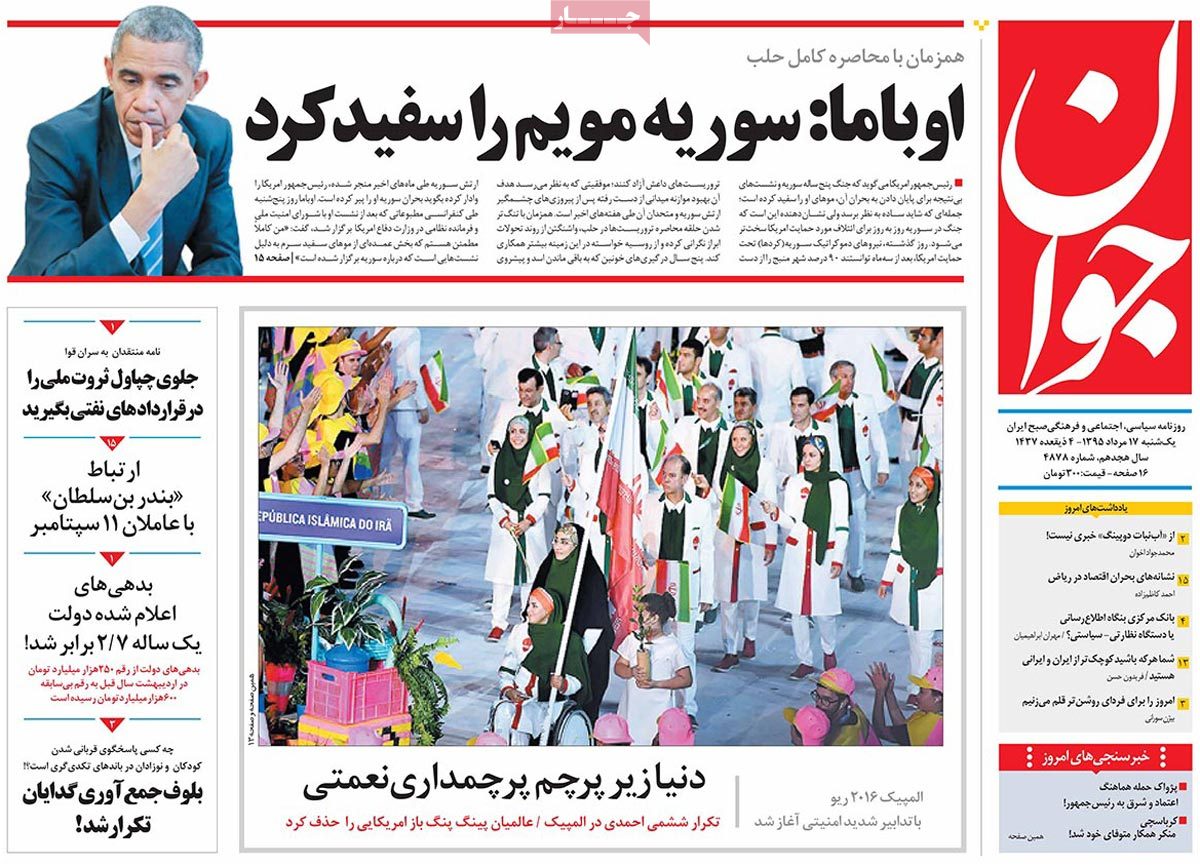 3- Saudis Confess to Their Defeat in Yemen

4- Trilateral Meeting between Rouhani, Putin, and Aliyev in Baku 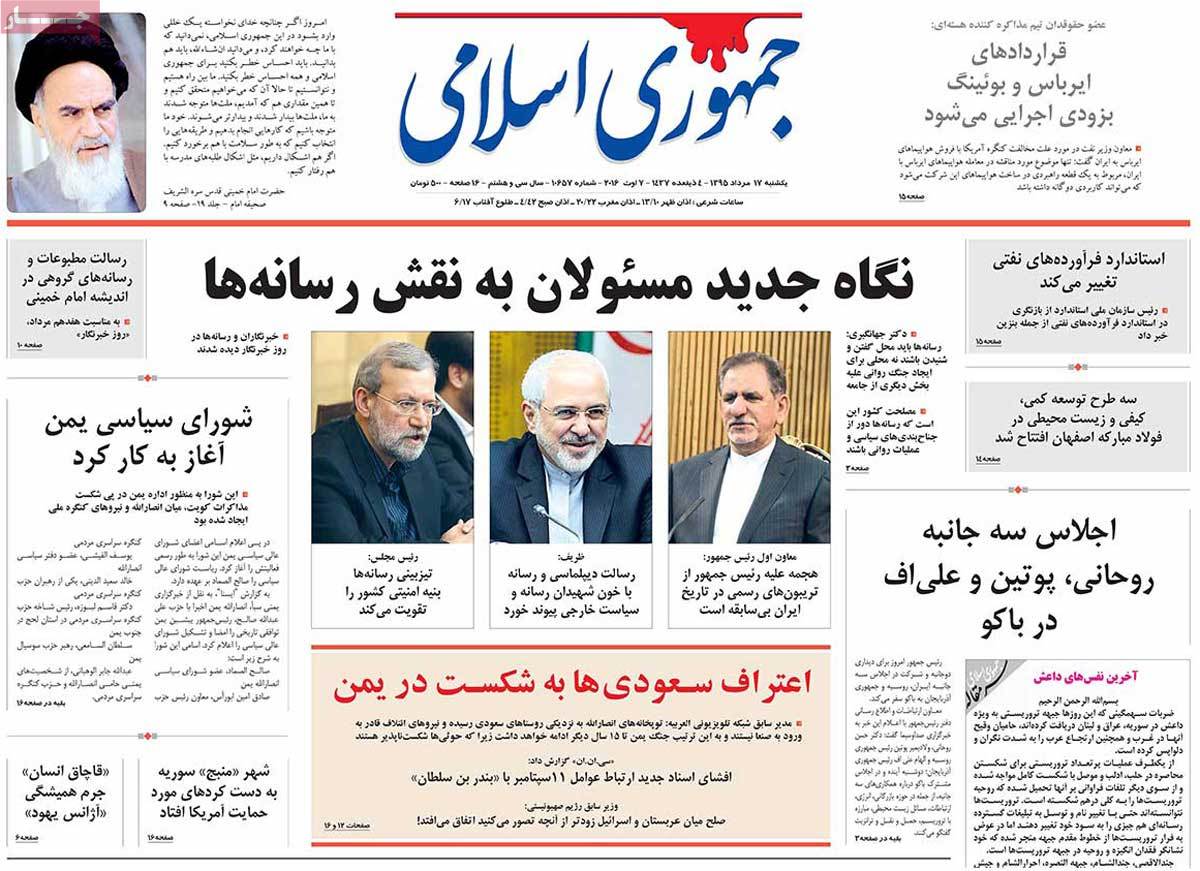 1- Danger of Long-Term Commitments in Last Year of Rouhani’s Term: A Look at Repercussions of a Number of Questionable Accords

4- ISIS Is a Product of US, Not the Shiite-Sunni Conflict 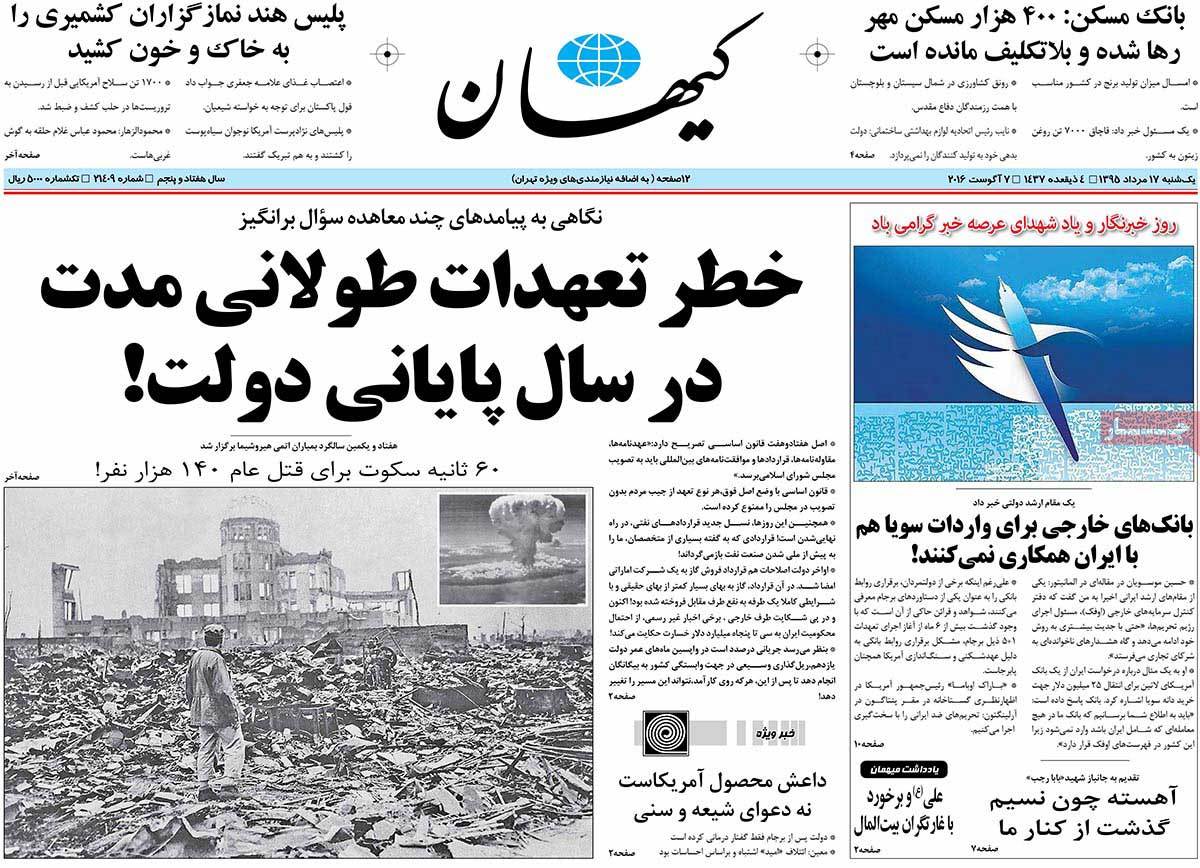 2- Cyberspace Official: Telegram Is Ready to Transfer 1,000 Servers to Iran

3- Government’s Performance in Past 1,001 Days: Promises More than Actions 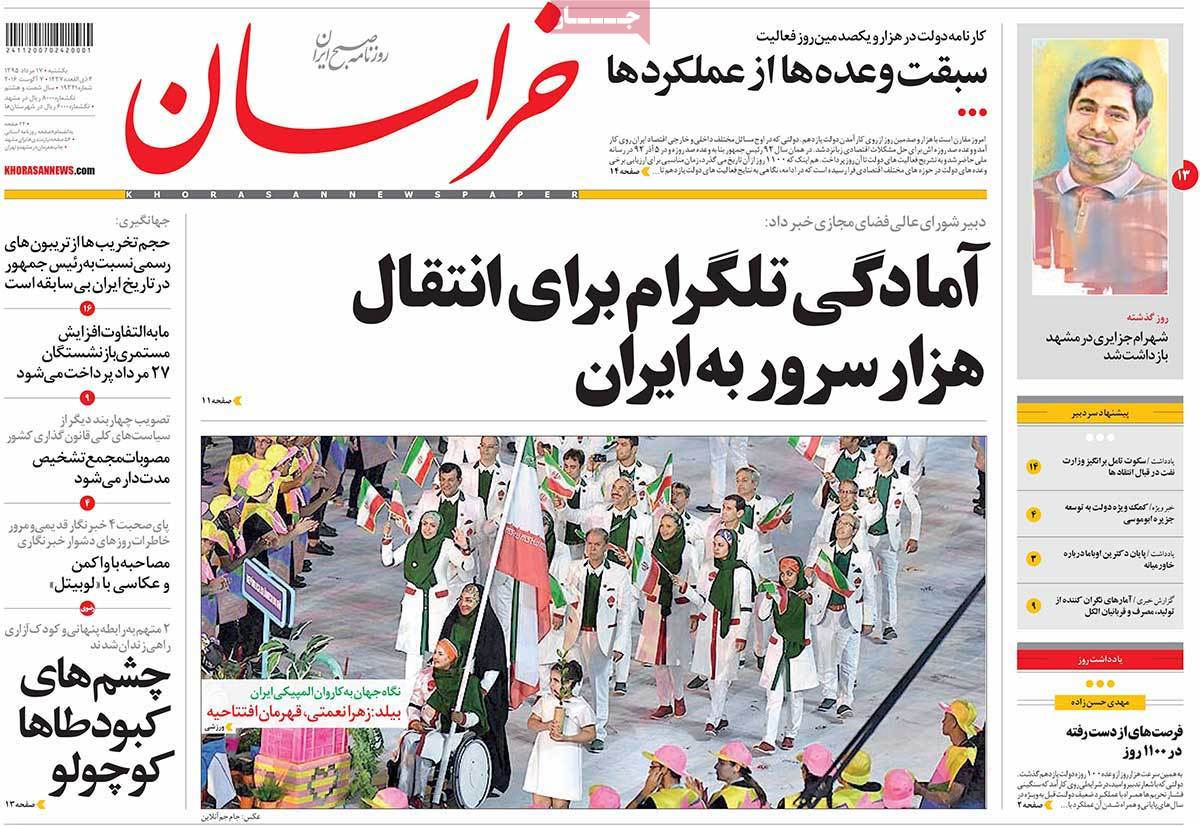 2- Ex-FM: Support for Axis of Resistance Is Iran’s Honour

3- Washington Doesn’t Show Mercy towards Its Allies: Trust in US Is Expired 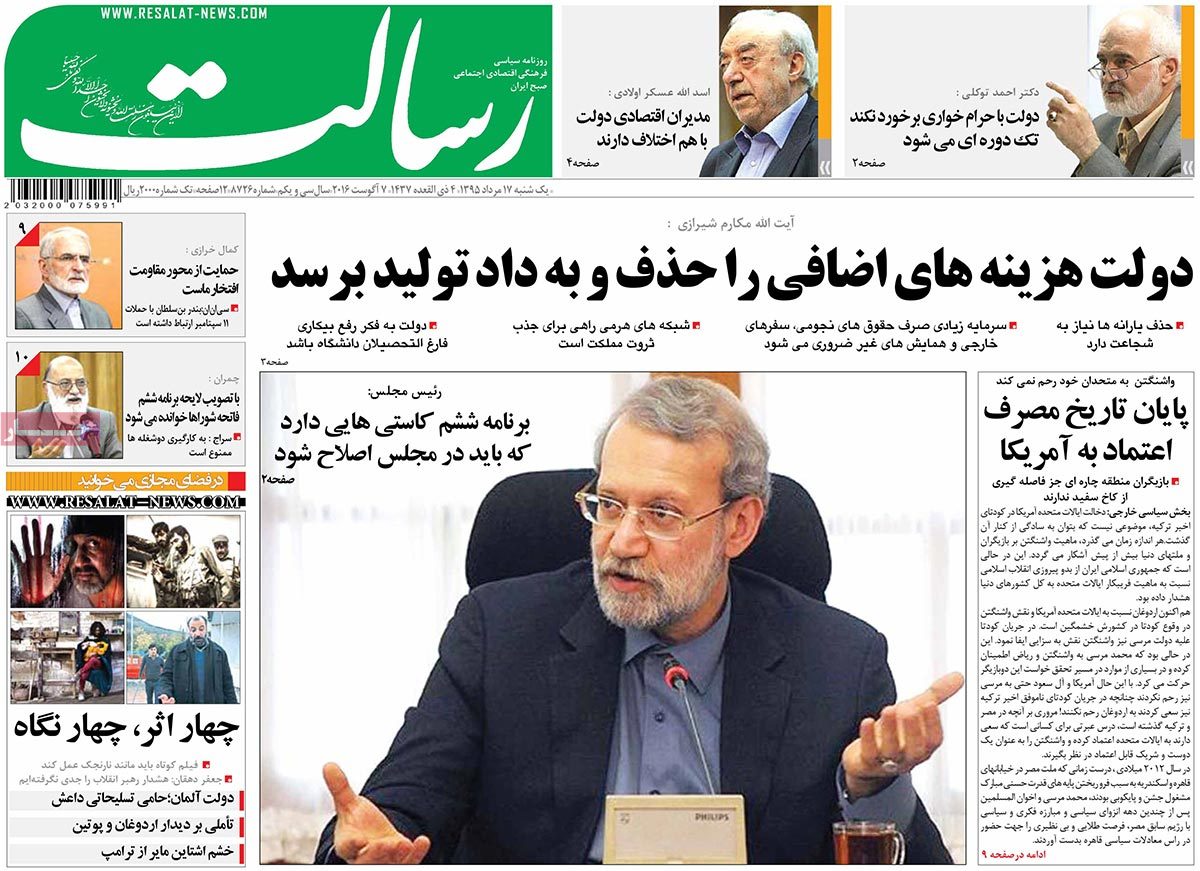 1- First VP: Obscene Remarks Are Made against President Rouhani 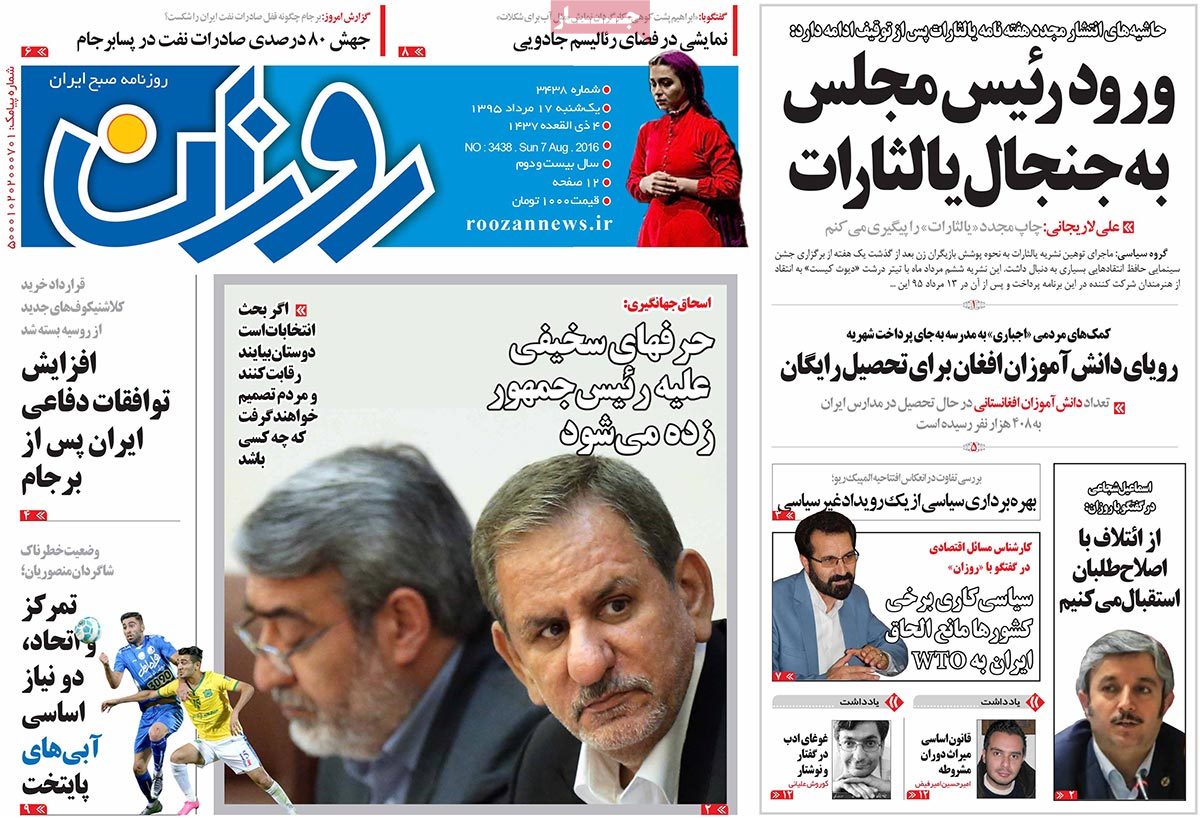 1- Increase of Corruption in Absence of Media: First VP

2- Job Security Is the Best Gift to Reporters: Culture Minister

3- A Report on What Happened in Rio Olympics’ Opening Ceremony: From Volleyball Players’ Strike to Norm-Breaking Flag Bearer of Iran 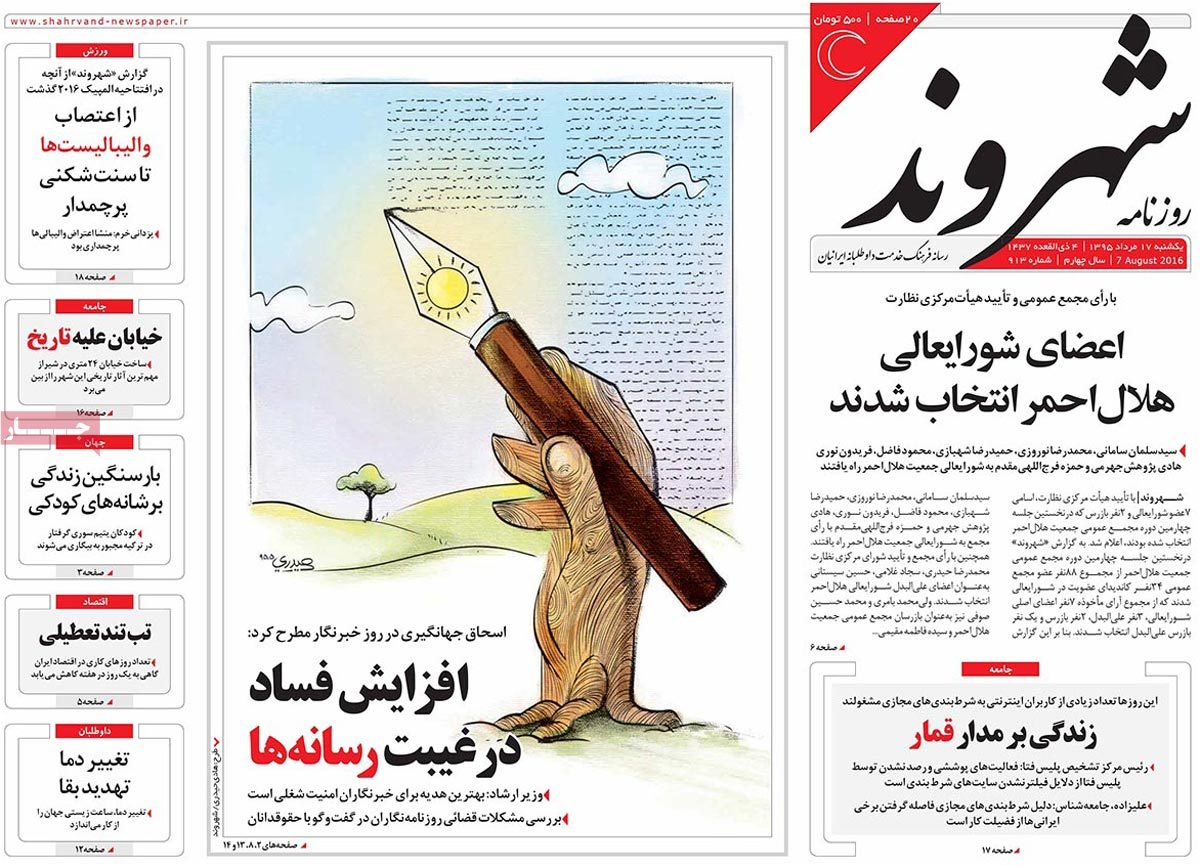 1- A Report on a Scenario for Eliminating Rouhani

2- They Have Put Pillars of Islamic Revolution against Each Other: First VP

3- Turkish Ambassador to Tehran: We Had No Doubt about Iran’s Support 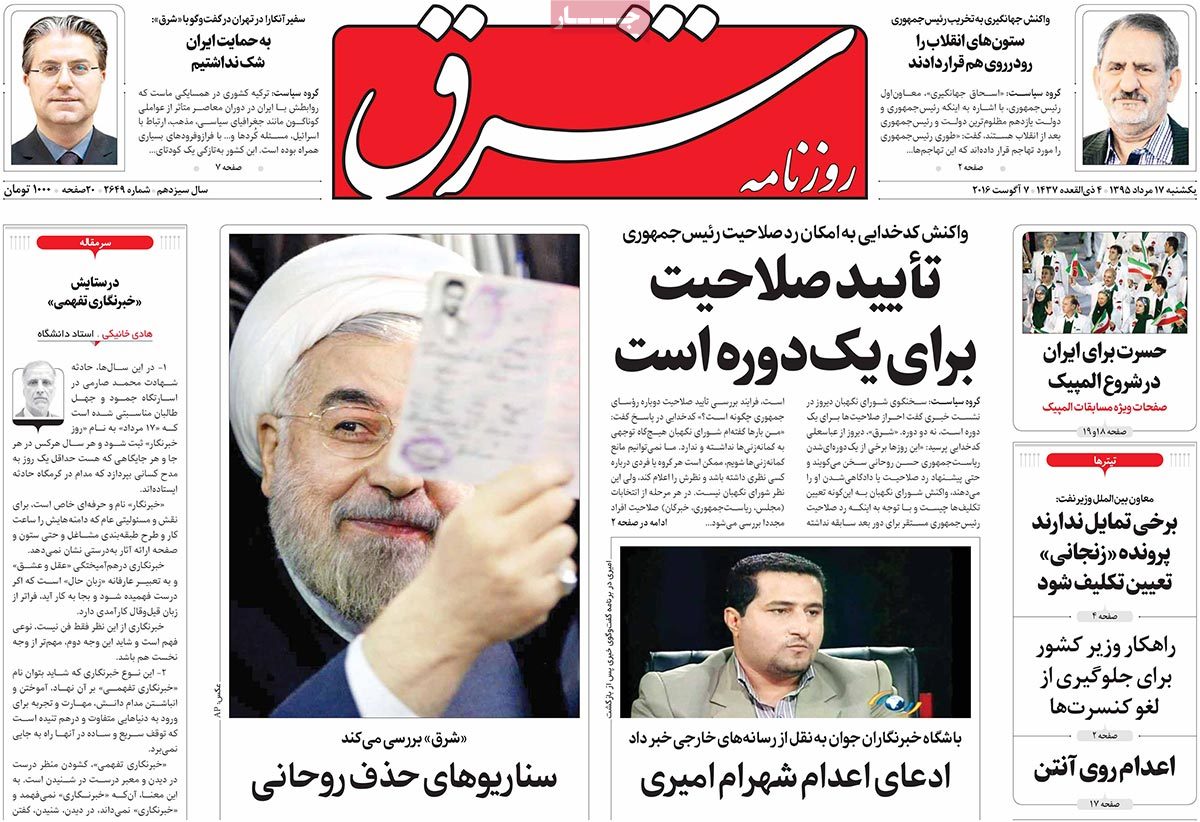 2- Guardian Council Member: Actions against Violations of Electoral Law Are Fruitless and Slow 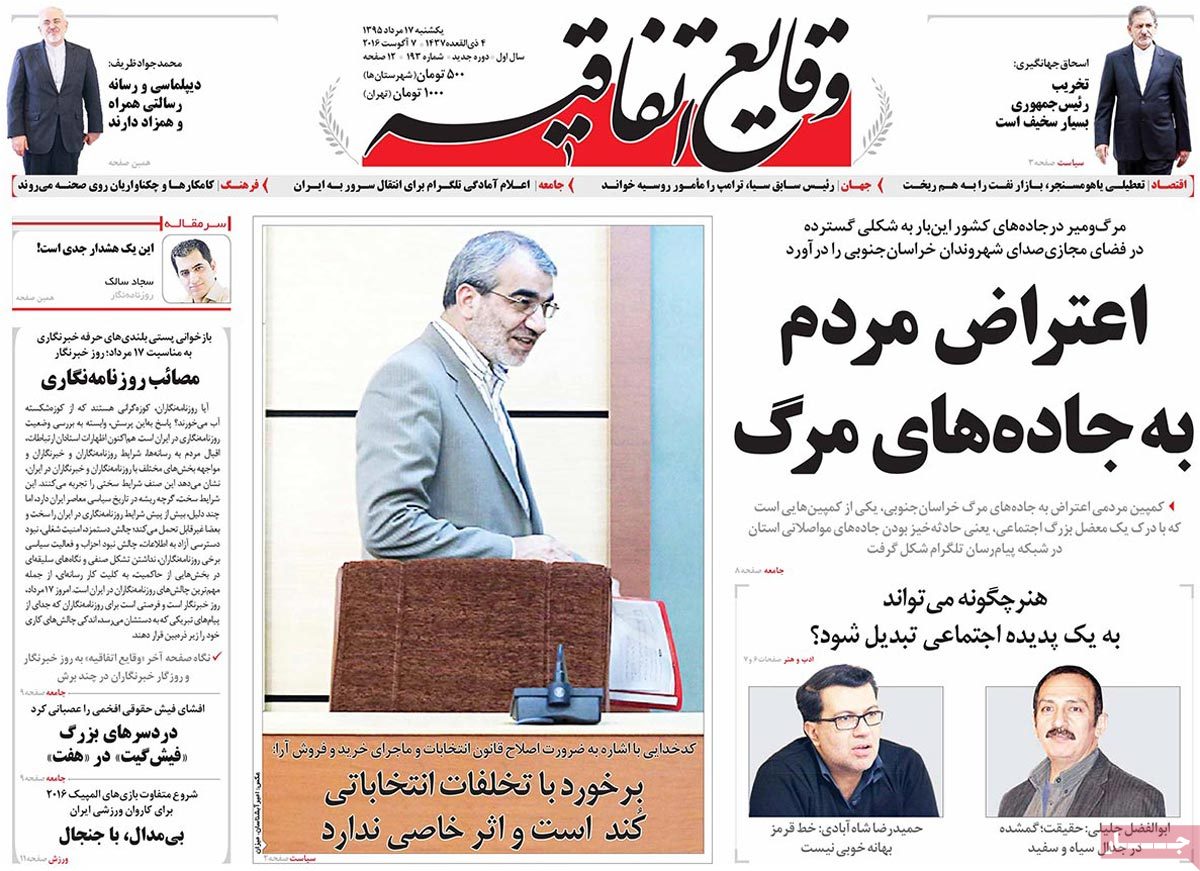