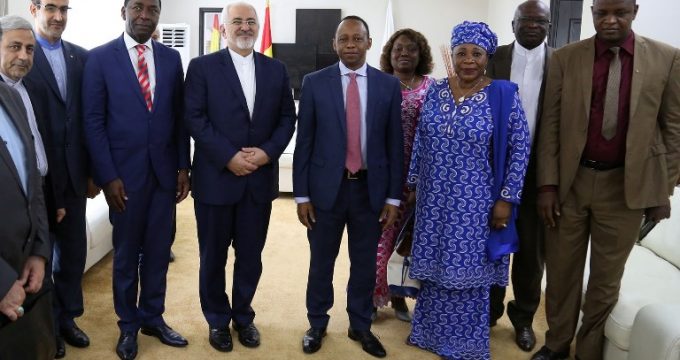 Why Iran must attach importance to Africa?

Iran’s Foreign Minister Mohammad Javad Zarif recently headed a big economic delegation on a four-nation, six-day tour of West Africa, which was the biggest Iranian delegation to visit that region in the past years. The question, however, is what prompted Zarif to embark on such a trip?

Africa has gained increasing importance in economic, political and military terms since the beginning of the current century. This issue is to a large extent due to saturation of economic capacities elsewhere in the world. The industrial and semi-industrial world is looking for new markets and raw materials as a result of which it has started a strategic move toward Africa. Another reason for the importance of Africa is the role played by votes given by African countries in strengthening international currents and the use of these currents for making strategic decisions, taking into account that 54 African countries are members of major international bodies. Therefore, most countries have been trying to get the support of Africa and have been doing their best to bring more of African countries into their spheres of influence.

The signs of the rising importance of Africa can be seen in the intense rivalry among big powers over African markets and presence of Western military forces, which have established a new command in Africa since five years ago and are trying to get control of its energy flow. In addition, joint sessions held by industrial and semi-industrial countries with African states, in addition to sessions held by the UK and France with African countries is among other signs of the rising importance of this continent.

Therefore, Africa enjoys an important position in political, economic and military terms. African countries are taking steps in the direction of forming regular armies and the continent can be also a good market for weapons manufactured by big powers. To see the extent to which we can have relations with Africa, we must take a closer look at the current economic and political conditions of our country, the region and the world.

After the signing of Iran’s nuclear deal with the P5+1 group of countries, known as the Joint Comprehensive Plan of Action (JCPOA), and during the post-JCPOA era, Iran has made new decisions to boost its relations with the entire world in order to do away with the untoward effects of hostile sanctions against the country and, in other words, take step toward meeting its essential needs. Therefore, in pursuit of this goal, it has been trying to boost and increase its relations with different countries.

Due to their special coordinates, African countries enjoy good resources for the supply of raw materials for the production of foodstuff and industrial products. The continent is also a good market for Iranian products. In addition, in terms of training specialized manpower, Iran is in a good position to export specialized forces as well as technical and engineering services to Africa.

These relations will be beneficial to both sides, especially taking into account that 54 African countries are member states of the Non-Aligned Movement and almost all its members voted in favor of Iran’s nuclear rights. On the other hand, most African countries have accepted Iran as their strategic partner. Moreover, African countries account for half of the members of the Organization of Islamic Cooperation and their role in the United Nations and its human rights affiliates and even within the International Atomic Energy Agency’s Board of Governors is so important that all countries compete to take advantage of potentialities of African continent in these bodies and our country is no exception to this rule.

It seems that with regard to Africa, first of all, we must take a series of measures to meet our immediate needs in political and international fields.

At present, most countries, even powerful Western states, are trying to make African countries a partner to their political decisions in order to boost their influence on international currents. This is true because today, the decision-making process in international bodies and even with regard to regional developments is not under the influence of any specific country and any development is to a large extent reliant on the votes of concerned countries and their allies.

Even a country like the United States needs the votes of other countries and consensus in order to achieve its goals. The Islamic Republic of Iran should rely on its good track records in Africa in order to take advantage of potentialities of African countries.

In order to boost its cooperation with Africa, Iran has to do many things. We need to have strong people in Africa and we also need to have powerful cultural and economic advisors and experts there.

In the economic sector, attention to Africa’s potentialities and the capacities that we have to launch certain projects, such as power line construction, telecommunications, dam building, silo construction and so forth, can earn us great revenues.

On the other hand, Iran can enter into negotiations with production sources in Africa in order to produce many goods that are in demand inside the country, including sugar, cacao, banana and many minerals. In addition, when it comes to the field of culture, there are numerous commonalities between Iran and African countries which can play an effective role in promotion of relations.

Naturally, there is a long way to go to reach a desirable situation. However, given the willingness of African nations and the positive position of Iran in the eyes of African nations and also in view of our non-colonialistic relations with these countries and the help we have provided liberation movements in Africa during the past 36 years, especially the black movement in South Africa, there are good grounds to be used in this regard and this is an opportunity which must not be easily squandered.