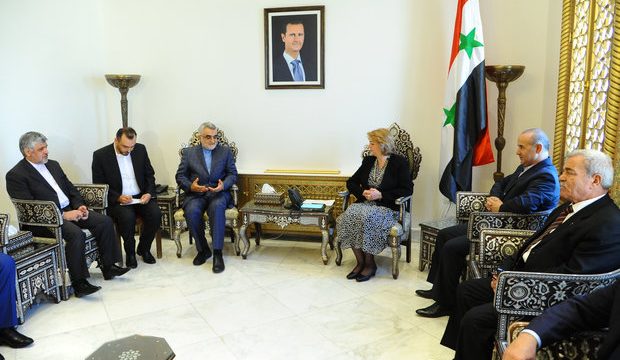 DAMASCUS, SANA – A 3-member delegation of Parliament National Security and Foreign Policy Commission has arrived in Damascus to carry out a general examination of the situation on the ground in war between Syrian Army and terrorists.

On Wednesday, Speaker of the People’s Assembly Hadiyeh Abbas received head of the Iranian Parliament commission Alaeddin Boroujerdi, and discussed with him issues of mutual interests and political and economic relations between the two countries. During the meeting, Boroujerdi underlined the strong historical relations between Syria and Iran, stressing that the bonds between two countries cannot be broken.

He voiced Iran’s relief and pride in the victories achieved by the Syrian Army in the war against terrorism despite the fact that over 80 countries are involved in the war on Syria, adding that terrorism is backfiring on its supporters in Europe and other states that conspire against Syria. Boroujerdi said that President Bashar al-Assad was the protector of the Syrian people, voicing pride in President al-Assad’s steadfastness throughout the years of war imposed on Syria.