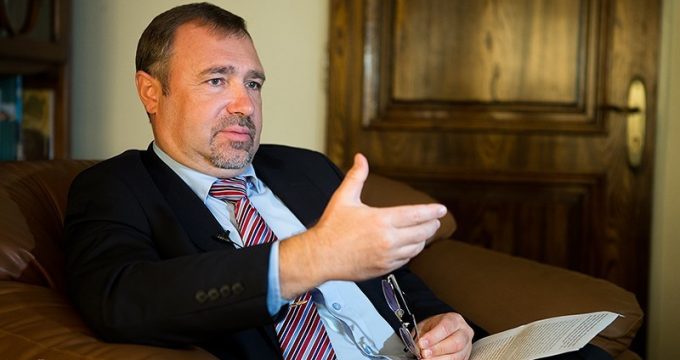 TEHRAN (Tasnim) – Ukraine’s Ambassador to Tehran Sergei Buldiliak said he is going to use his experience as a diplomat in charge of handling consular affairs to ease the visa restrictions for the Iranians traveling to Ukraine.

In an exclusive interview with the Tasnim News Agency, Mr. Buldiliak expressed the confidence that Iran and Ukraine can manage to end visa requirements for bilateral visits.

He also highlighted the upward trend in economic cooperation between Tehran and Kiev, referring to a multi-billion-euro agreement the two countries have recently signed in the railroad industry.

What follows is the full text of the interview:

Tasnim: Some time ago, Ukraine’s foreign minister paid a visit to Iran and met with Iranian officials. Since then, how much progress has been made in the bilateral relations? In what specific areas has the progress been made? How high is the volume of bilateral trade and is it close to the one-billion-dollar target set last year?

Ukrainian ambassador: The visit of the minister of foreign affairs of Ukraine Mr. Pavlo Klimkin to Iran was aimed, first of all, to start the political dialogue between Ukraine and Iran anew. It is no secret that a visit of such level has not been held for the last 13 years. And it is also important to mention that no meeting of the intergovernmental commission on economy and trade has been held in 12 years, until this year. Now, while our bilateral relations have a huge potential for development, there are a few obstacles in our way. The first and foremost need is to speed up the political dialogue. During the meeting between Mr. Klimkin and the president of the Islamic Republic of Iran, H.E. Mr. Hassan Rouhani said that no third country can influence the cooperation between Ukraine and Iran. We welcome this attitude – no intermediary is needed for our dialogue. In this regard, the negotiations on the level of Vice-MFAs is planned in the nearest future – in August this year.

Second, tremendous effort has been made on the way to simplify the procedure of visa issuance. Next month the visit of the director of the counselor department of the Ukrainian MFA to Iran is planned. I hope that during the “counselor consultations” with his Iranian colleague an elaborate, step-by-step mechanism of simplification will be made. The situation in this area right now is unsatisfactory for the Iranian side and we acknowledge this. Right now it is easier for an Iranian businessman to get a visa to Germany than to Ukraine.

Answering your questions about the volume of the overall trade between Ukraine and Iran, I must touch upon another stumbling stone on the way of the development of our economic relations. I mean banking transactions. During the last joint economic commission where the Ukrainian vice president of the central bank was present, who held talks with the vice president of the Central Bank of Iran, they agreed to exchange the lists of the reliable banks who could start such transactions in a short period of time.

As far as I know, Ukrainian Exim Bank and the bank of the Middle East of Iran (Khavar-e-Mianeh) are operative in this plan. Still, technical issues (the difference of the official and non-official exchange rates in Iran and the reform of the banking sector in Ukraine) prevent these processes from starting. Under these circumstances the Ukrainian and Iranian companies look for other ways to facilitate the trade processes. They use intermediaries from other countries like China, Turkey, Georgia and the United Arab Emirates. In this way, the statistics of our bilateral trade is not very good. It is only 210 million euro for the first 6 month of 2016 – a decrease in almost 35% in comparison to the last year, while the same statistic concerning Ukraine’s trade with the states I just mentioned has increased. This indicator is disturbing, especially while there is persistent information that numerous Ukrainian companies are closing new deals with their Iranian counterparts. But I believe that the situation will change for the better in the nearest future. 1 billion US dollar turnover between our countries is an absolutely real figure and we may even achieve it this year, provided that direct transactions between our banks will start soon.

Tasnim: Iran and Ukraine have recently signed an MoU in the railroad sector and on implementing large-scale railroad projects in Iran. Do you have more details on this? When will it take effect?

Ukrainian ambassador: I wasn’t present in Kyiv during the signing of the MoU between the Ministry of Infrastructure of Ukraine and the Ministry of Roads and Urban Development of Iran, but I do know that the Ukrainian companies, both state and private, have been invited to take part in the railway projects in Iran, which are evaluated to cost over 10 billion euro. I must say that it is an extremely important step on the way to bring our economic relations to a new level. One can already see the results of this MoU – some Ukrainian machine building companies like “Krukiv wagon building plant” and “Azovmash plant” are holding talks with “Kors wagon” and “Pars wagon” companies to make industrial joint ventures to further work in Iran.

Tasnim: Do you see any progress regarding Iran and Ukraine’s cooperation in the field of producing airplanes and helicopters? What types of aircrafts does this include?

Ukrainian ambassador: I do not only see, I do everything I can to promote the negotiations between the Ukrainian aircraft producers and Iranian companies. As you may know, Ukraine is the only country that contributed to the development of the Iranian aviation industry even during the worst sanctions against your country. Our enterprise “Antonov” together with the “HESA” enterprise produced 19 airplanes “IRAN-140-100”. After the unfortunate accident at the Mehrabad airport in August 2013, the joint production of this beautiful machine was stopped. We are close now, however, to start the negotiations about it once more.

As for the helicopters, our big companies like “Motor-Sich” are ready to cooperate with Iranian partners in the sphere of helicopter maintenance, especially the engine.

Tasnim: Do Iran and Ukraine have any cooperation in military related areas? There have been some speculations on transferring Kh-55 cruise missiles from Ukraine to Iran. Do you confirm it?

Ukrainian ambassador: I can comment that Ukraine complies to the decision of the UN Security Council which restricts military-related cooperation with the Islamic Republic of Iran. While this is a sensitive topic, I will provide my personal thought about this matter –we have a lot of unused potential in this sphere.

And I must say the speculations on transferring Kh-55 cruise missiles from Ukraine to Iran are most likely untrue.

Tasnim: Ukraine’s Minister of Infrastructure has referred to mutual cooperation on a multimodal transport route connecting Iran to Europe via Ukraine. Have any practical efforts been made on this field? How much time would this project need to take place?

Ukrainian ambassador: Let me explain. Multimodal transport route means that a company may send their wares using several different means of transport – for example, take it by truck to Azerbaijan, then by the railway to Georgia, then ferry it by sea to Ukraine, then – again by railway to Poland, and so on and so forth.

Ukraine is ready for this. Our transportation system is diversified and not expensive to use. We already have existing agreement in this area – an international protocol of a meeting between the customs officials of Ukraine, Georgia, Iran and Azerbaijan, which happened in January 2016. Some shipments from Iran to Germany through the territory of Ukraine, as far as I know, have already happened. All we need now is non-oil export of Iran to the EU to rise, which, I am sure, is just a matter of time.

Tasnim: Are there any trips planned for Iranian officials, including Foreign Minister Zarif, to Ukraine or Ukrainian officials to Iran in near future? Is there yet any plan for visits at the level of leaders?

The invitation for President Petro Poroshenko was set forth by Iran’s President Hassan Rouhani, who met earlier with Ukraine’s foreign minister. We are currently working on planning and mapping out the details of his visit, especially its date. Preparations for this visit should be made carefully, because the last time a Ukrainian President visited Iran goes back to 20 years ago and that means important documents should be prepared and signed. This has resulted in very serious political talks. It explains why the Iranian and Ukrainian officials visit each other’s countries.

Therefore the visit of the president of Ukraine to Iran shall positively bring the previous visits to fruition. It also creates a pathway and a general perspective for the years to come. All these, of course, are on the task list for the President’s first trip, but I hope the heads of the two countries can pay bilateral visits more often.

Tasnim: Is it possible to get rid of visas between the two countries?

Ukrainian ambassador: The agreement planned for the first step does not mean we can get rid of visas, but it signifies the mechanisms of issuance will be eased. For example, if someone comes to the embassy with their passport and invitation in their hands, their visas will be issued in no time. Furthermore, those travel agencies that visit us at the embassy will simply get their visas, too.

Tasnim: Why should someone have an invitation if they want to travel to Ukraine as tourists?

Ukrainian ambassador: Tourists do not need invitations and can get their visas using their residence voucher. I’m quite confident we can obtain success in this area, because I was in charge of consular affairs for 5 years in Beijing and another 5 years in Shanghai, which brought me rich experiences.

In fact, in all those years, I was taking care of the visa issuance procedures for the Chinese. For instance, an agreement was placed into effect this year which helped the Chinese get a visa to visit Ukraine during summer merely in 15 days.

That is how we intend to first talk about easing the process in Iran and after that, I promise as the ambassador that we embark on a journey to lift the visa issuance. But we should not forget that diplomacy is the art of moves and tools. This is my point of view as the Ukrainian ambassador to Iran.