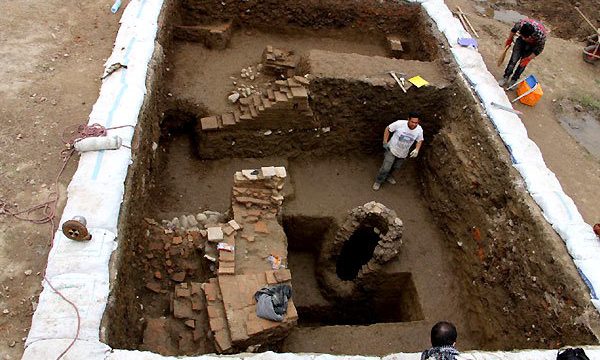 Ebrahim Amirkalaei the head of the expedition told Mehr News local correspondent in northern city of Amol that investigations of the site for architectural spaces belonging to Islamic, medieval, and modern periods had been based on written histories at hand, however, “new excavations in coordination with city municipality allowed systematic excavations in the Hall of Fame part of the site; this is the first ever such well-organized excavation of the site in Amol’s old section and a beginning of regular excavations to find insight into city’s distant as well as recent past,” he told Mehr News.

“Excavation has been carried out in north and northwest parts and another in central part of the site; the northwest excavation was cut into the opening of brick-walled well identified while leveling operation was underway, to create better chances to understand architecture of the spaces to which excavations gave birth,” he detailed. “The excavation identified 16 contexts including diverse architectural spaces; among the objet d’art are glazed ceramic and glass; architectural spaces are apart according to their different times of construction; the brick-walled well belongs to modern Qajar period and to the southeast of the well, we found a square space with an arch; we estimate it to have belonged to 9th and 10th AD according to the pottery and brick types used,” Amirkalaei asserted.

The head of expedition also pointed to pottery objects found in the site; “the most important pottery especially carved and glazed type belong to 4th and 5th centuries AD, light-weight Amol pottery and unicolor glaze on vogue in 5th and 7th AD belong to Saljukid era; Ilkhanid-era pottery also were found with dark scripts under an azure glaze and even celadon-type pottery of the Safavid era were among the objets trouves,” Amirkalaei told Mehr News.

“The glass objects had been built by blowing the air and drying in the open air; the northern part of site was excavated to explain why wells are dug in proximity to each other and their applications; apart from Islamic-era pottery, we found large volumes of once-molten and deformed glass, which gives force to this hypothesis that the site had been an industrial glass-making workshop,” he said. “Bronze coins found during the excavations would help dating of the layers of the unearthed material strata.”