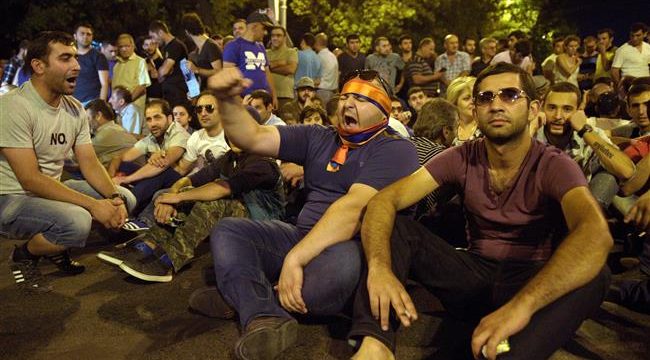 A two-week-long standoff between Armenian police and a group of anti-government gunmen who had seized a police station has come to an end after the armed group surrendered.

The gunmen laid down their guns and gave themselves up on Sunday, one day after police threatened to storm the building in the capital Yerevan.

“The security forces’ anti-terrorist operation has ended after the members of the armed group laid down their weapons and surrendered to the authorities,” said the country’s national security service in a statement.

It noted that twenty “terrorists” were arrested and the police station has been fully liberated.

Earlier, a Health Ministry spokeswoman, Anahit Haytayan, announced that the two remaining hostages, both medics, had been released.

Two police officers were killed during the situation, but the gunmen claimed one of them could have been shot by police snipers by mistake and that the medical staff hostages were in the compound to treat the wounded of their own volition.

Before surrendering, the group released a statement announcing that they were ready to lay down their guns.

“We will continue our struggle from prison. We believe that we have achieved our goal: we became the spark that allowed people to rise up and it makes no sense to spill blood,” it said.

Several anti-government protests have been held in Yerevan in support of the gunmen since they seized the Regiment of Armenian Patrol-Guard Service building in Yerevan and took hostages on July 17.

The gunmen had demanded the release of Zhirair Sefilyan, a jailed Lebanese-born Armenian military commander and main political opposition figure.