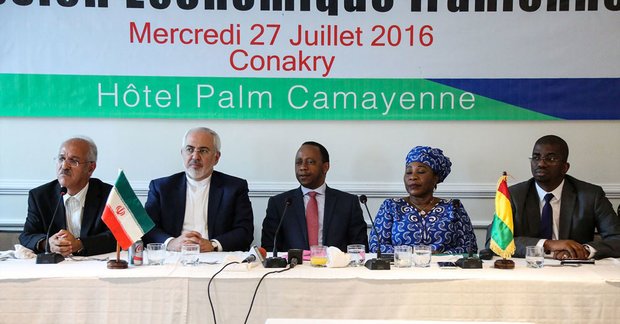 The foreign ministers of ten members of the Association of Southeast Asian Nations (ASEAN) have agreed on Iran’s joining to the Treaty of Amity and Cooperation.

Foreign Ministry spokesman Bahram Qassemi on Tuesday dismissed the US charges that three terrorist Al-Qaeda forces are present in Iran.

Iranian Foreign Minister Mohammad Javad Zarif says projects by the Israeli and Saudi Arabian regimes to portray Iran as a threat to the world have been falling flat over the past years.

Zarif: Iran ready to cooperate with Ghana to fight terrorism

The Guardian Council has endorsed the decision to hold the 12th round of Iran’s presidential elections on Friday May 19, 2017.

Trip to West Africa is expected to introduce a new chapter in relations of the Islamic Republic with this region, Foreign Minister Mohammad Javad Zarif said on Wednesday.

Secretary of Iran’s SNSC and Pakistan’s national security adviser have issued a joint statement on security where they emphasized upon fighting terrorism and extremism.

A number of prominent commandos of the Iranian Army and the Islamic Revolution Guards Corps (IRGC) are in Russia to participate in the upcoming International Army Games 2016.

Commander of Iran’s Army Ground Force said his forces are scheduled to hold three war games in different parts of the country by the end of the current Iranian year (March 2017).

Tehran has slammed the Saudi regime for pushing ahead with its “divisive policies” in a recent Arab League summit, saying the outcome of the meeting showed Riyadh has failed to muster support against Iran.

Foreign Minister Mohammad-Javad Zarif said on Tuesday that banking ties are available to Ghanaian businessmen for trade with Iran.

The latest market figures show that Iran’s exports of crude oil have already reached the highest levels in more than four years.

Governor of the Central Bank of Iran (CBI) Valiollah Seif said on Thursday that Iran will experience an economic growth rate of five percent by the year end if its economic falls in right direction.

The World Bank says a landmark nuclear deal that Iran signed with the P5+1 last year has already enabled the country to gain access to as much as $30 billion of its assets that had been frozen as a result of the sanctions.

Russia, Iran to sign industrial cooperation roadmap with over 70 Projects

Russia and Iran have agreed to sign a roadmap for cooperation in the industrial field.

A report by ISNA has pointed to excerpts from the remarks made by foreign tourists and travellers who have visited Iran throughout the history. Here’s IFP’s translation of the report:

Deputy Head of Iranian Space Agency Jafar Roshanian said on Monday that Mesbah satellite jointly developed by Iran and Italy is ready to be launched.

Holy city of Mashhad, capital of Islamic Culture in 2017 an opportunity for promotion Muslim Unity

Iranian Foreign Ministry Spokesman Bahram Qassemi said that selection of the holy city of Mashhad as the capital of the Islamic culture in 2017 by the Organization of Islamic Cooperation (OIC) provides a good opportunity for introducing Iran’s Islamic civilization.

Animals, as well as humans, are not immune to the adverse effects of the protracted drought that the world is grappling with. Wetlands and marshes are drying up and animals’ wildlife habitats are inching forward to a complete destruction.

Almost 5,000 hectares of national property, which were occupied for breeding wild animal species, have been retrieved by the Department of Environment following reports that the breeders were violating the terms of their agreements with the DOE.

The Al Khalifah regime in Bahrain has declared Wednesday as the date for the trial of distinguished cleric Sheikh Isa Qassim.

A court in Bahrain has launched the trial of prominent bahraini Shia cleric Sheikh Qassim and court session lasted a mere ten minutes, according to reports. Sheikh Qassim was not present at the session, which produced no verdict.

Syrian President offers amnesty to militants who lay down weapons

Syrian President Bashar Assad offered an amnesty to militants who turn in their weapons insisting that the amnesty has been virtually in effect in Syria since day one of the terrorist war against the country.

Hezbollah Secretary General Seyyed Hassan Nasrallah has censured Saudi Arabia for a recent visit to Israel by a delegation headed by a former military general.

Without Iran help, Iraq would have fallen: Iraqi envoy

Latest developments in the town of Manbij indicate that the Syrian Democratic Forces (SDF), mainly comprised of Kurdish fighters, are about to push ISIL back from its positions and capture the remaining districts of Manbij in coming hours, military sources said Saturday.