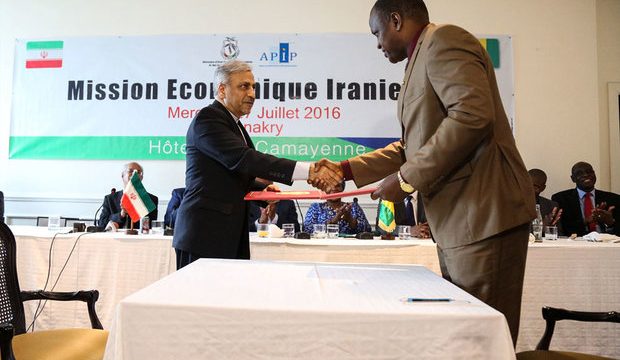 In an exclusive interview with IRNA, Kiani said to this end, Iran-Guinea Conakry Joint Economic Commission with be formed soon.

Kiani said Africa is the ‘land of opportunities.’

He said that Iranian officials had during the visit, met with 14 Guinean ministers as representatives of Iranian private sector held bilateral and multilateral meetings with the counterparts and related ministers.

The diplomat said the Guinean party hosted the officials of the governmental economic sectors and representatives of major manufacturing, infrastructural, technological, agricultural, food, industries and mineral companies of Iran in the visit, while providing warmest and rare welcome to Zarif and the accompanying delegation for economic cooperation.

The envoy said presence of the prime minister and more than six ministers of Guinea in charge of economy in the Joint Economic Commission and also the addresses of Guinean Prime Minister and of Zarif all testify strong endeavor of the sides for joint cooperation.

Elsewhere in the interview, Kiani referred to the guideline of the Supreme Leader of Islamic Revolution Ayatollah Seyed Ali Khamenei for constant and permanent cooperation with Africa, the ‘land of opportunities.’

He said the ‘land of opportunities’ consists 62 countries, one of them Guinea with 90 percent of its population being Muslims.

He added that at the time of the war imposed on Iran (1980-88), the late leader of Guinea, Ahmed Sékou Touré, met with father of the Islamic Revolution and founder of the Islamic Republic, the late Imam Khomeini, for three times as a gesture of support and refused to accept many financial assistance of the so-called Muslim states forwarded in support for Iraq.

‘It is the country that was with us at difficult times and supported the sacred Islamic establishment, being still in line with us at international organizations and has proved this in 37 years of Islamic Revolution,’ commented the Ambassador and said certain countries, however, tried to hamper cooperation between Iran and Guinea to disrupt their relations.

Kiani said the two-day visit of Iranian senior officials to Guinea and their separate meetings with officials of the country testifies expansion of mutual economic cooperation, now juxtaposed with political and cultural cooperation.

Asked to comment on likely problems and ways of promotion of the relations, he said lack of businessmen’s information is among the problems. He said another point is establishment of offices and presence of Iranian companies there. ‘Absence of direct links of the companies with the Guinean parties has hampered mutual economic cooperation.’