A Look at Iranian Newspaper Front Pages on July 28

Iranian newspapers on Thursday covered the ongoing terrorist attacks in different parts of the world including Syria’s Qamishli.

They also highlighted the progress made by Syrian army in retaking and liberating ISIS-held cities.

Note: Newspapers in Iran will not be published on Saturday, which is a holiday to mark the martyrdom anniversary of sixth Shiite Imam, Imam Ja’far al-Sadiq.

1- British Churches on the Alert 1- Rafsanjani: Assigning Affairs to People Is an Original Islamic Thought

2- Suggestion for Exhumation of Kiarostami’s Grave 2- 150 Killed and Wounded in Blast in Northern Syria 1- 170 Four and Five-Star Hotels to Be Constructed in Iran: Official 1- A Woman’s Turn: Will Clinton Become First US President? 1- Astronomical Salaries: This Time in Football

2- Pokemon Go Is Filtered in Iran 2- No Need for Exhumation of Kiarostami’s Grave 2- Iranian and Foreign Analysts: JCPOA to Remain in Place Despite Change of Governments

4- Moscow: US No Longer Wants Overthrow of Assad 1- US Has No Position in Iraq, Popular Forces to Liberate Mosul: Iraqi Media Official Tells Kayhan

3- Deputy FM: JCPOA Includes Balance and Termination of Sanctions, But Only on Paper!

4- Siege of Aleppo Is Completed; Syrian Army to Terrorists: Surrender! 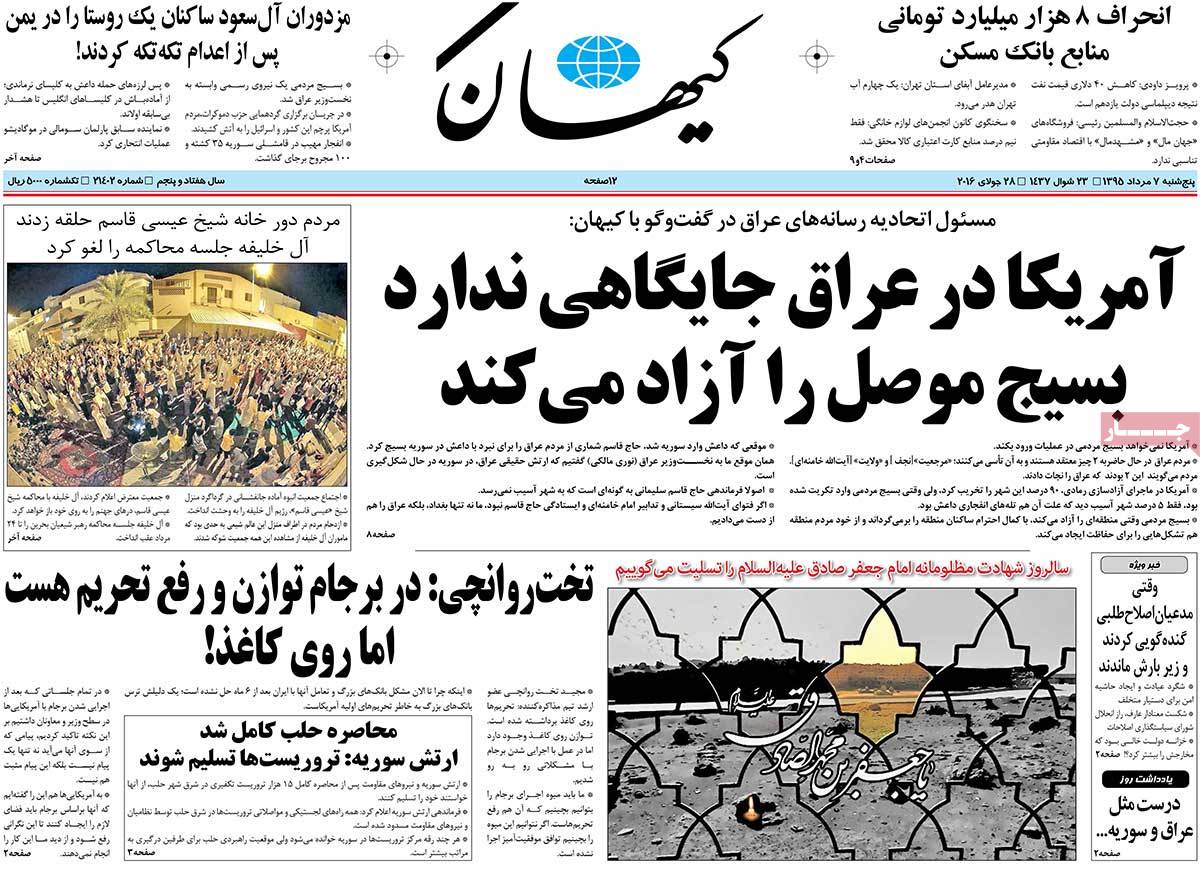 1- Increase in Non-Oil Exports after Months of Economic Downturn 1- Fallujah, the City of Ghosts: The City Burnt by Terrorists

2- Fear of Hope in Iran’s Parliament: A Report on Violation of Commitments by Certain Members of List of Hope