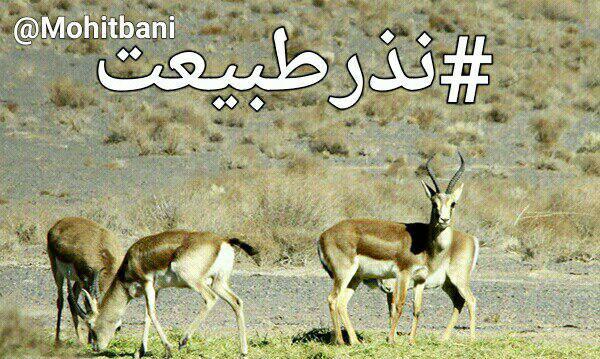 July 24, The Iran Project – An Iranian park ranger asked people on his Instagram page to make oblation for the nature to protect the environment and wildlife.

To protect the environment and wildlife, Ahmad Bahri, a 35-year-old park ranger from Qom province, trough launching a hashtag which means “making an oblation for nature”, offered oblations to those who love environment by making donations.

Expressing his satisfaction that Iranian people welcomed the plan, Bahri said some sent me messages to help watering places or feed gazelles in drought areas.

A large group of environment-lovers from Tehran also expressed readiness to build the first specialized wildlife clinic in Qom province for free, he announced.

Referring to some Iranian environmental benefactors, he said they have been recently keeping injured street animals like cat and dog in their houses for free.

He went on to say that some other people treat birds and animals like eagle, fox and deer in their houses.

Addressing environment activists and state officials in a meeting to mark the National Week of Natural Resources, Supreme Leader of the Islamic Revolution Ayatollah Seyed Ali Khamenei called on the government to take firm and serious steps to protect the country’s environment and green lands.

Iranian President Hassan Rouhani also called for decisive action against those causing harm to the country’s natural resources, describing protection of the environment as a national duty.