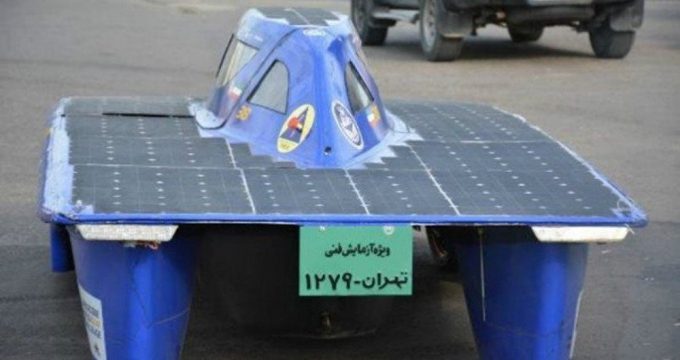 The Gazelle III, a solar vehicle developed by Iranian students at University of Tehran, continues its 8-day journey around Iran, from Bandar-e Anzali to Kish.

According to Mehr, the vehicle’s construction was completed in 2015. The Gazelle III is the third electric vehicle to have been made by Iranian students using solar panels.

Within the set time (8 days) Gazelle III must travel a certain distance, 2700 km, from Free Commerce and Industry Zone Anzali to another free zone on Kish Island, the director of the center of development and design of the Gazelle III, Karen Abri Niya, announced in his interview with Mehr.

“In the meantime, the vehicle has already passed through Rasht, Qazvin and Tehran (through ‘Partisan’ Park, Vali Asr Street and the territory of the charity foundation ‘Kahrizak’),” added Abri Niya. “The aim of its journey is to introduce Iranian citizens to the vehicle’s inventor and the car’s creators.”

“Our journey will give Iranians the opportunity to learn more about modern scientific discoveries, which are developed by students. They will see that universities, in addition to educational activity, work towards environment protection,” Abri Niya said.

On July 19, the vehicle arrived in Yazd and stopped near by the city’s local university. Then everyone had the opportunity to look at the solar car near Jamia Mosque.

Abri Niya explained that it is not a coincidence that the tour began at the Caspian Sea, as for Iran it is a significant ecological zone, and the Gazelle III is designed to protect the environment.

“Many Iranian roads are not suitable for the solar car’s travelling mission. For this reason alone, Gazelle III was not able to get permission from the traffic police to move along the planned path. Therefore, the solar car can only take permitted paths, in many cases through cities.”

According to the creators, the Gazelle III, which is capable of reaching a  top speed of up to 140 km per hour, is the first two-passenger electric car in the Middle East.

In 2015, during the World Solar Challenge competition in Australia, the Gazelle III was ranked third in speed and seventh in terms of the distance it covered.