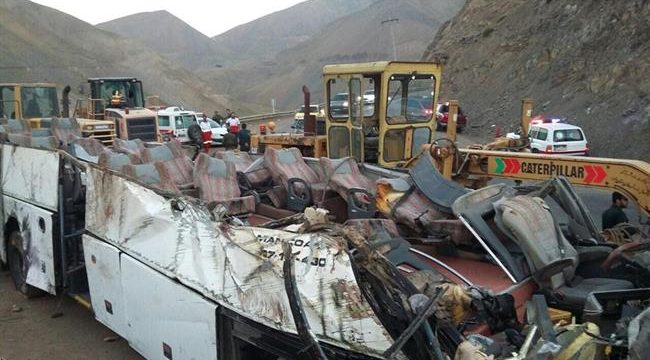 At least 16 people have been killed and 13 others injured after their bus smashed into a concrete electricity pylon and overturned in a mountainous road in northern Iran, a provincial police official says.

The traffic police chief of Alborz Province, Reza Akbari, told IRNA that the incident occurred in the wee hours of Saturday on the road linking the northern city of Karaj to the city of Chalous in northern Iran.

He added that the injured, some of them in critical conditions, were transported to hospital in Karaj.

The police official said high speed and the bus driver’s failure to control the vehicle caused the incident.

The accident came a day after at least 30 people were wounded when a train crashed into a truck crossing a railroad in the northern Iranian province of Mazandaran.

The truck was moving at a high speed on an unauthorized road while the driver was talking on his cell phone unaware of the train.

Iran has a high death rate resulting from road traffic accidents in the world.

The high number of deaths in traffic accidents comes despite major steps taken by the Iranian government over the past years for the enhancement of the quality of the country’s roads and improvement of the safety standards in automotive industry.