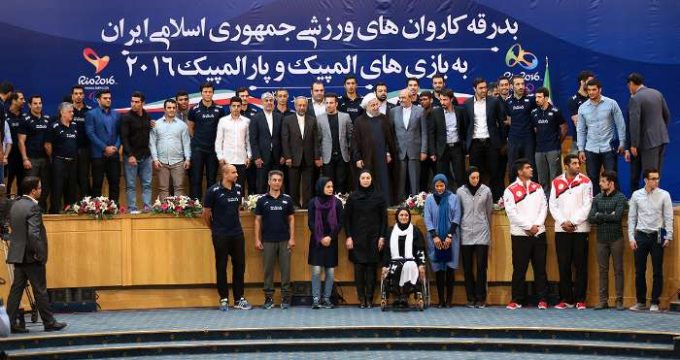 Rouhani calls for message of peace in Rio

TEHRAN, Jul. 21 (MNA) – President Rouhani of Iran addressed the Iranian athletes leaving Tehran for Rio on Wednesday at a ceremony held before dispatching the sport delegation to Olympics games.

“I am happy to be here, among you, and I know a nation is looking forward to hear good news from you,” said President Hassan Rouhani of Islamic Republic of Iran, on Wednesday, addressing the Iranian athletes leaving Tehran for Rio, and he continued, “I say good job to all of you for what you have done so far.”

At the ceremony held in Tehran, the Iranian hopeful athletes for Olympics and Paralympics games were dispatched by President Rouhani’s words of wishing luck.

Highlighting the rise of Iranian quotas with 63 Olympic and 96 Paralympics slot in 2016, Rouhani added that it is very important to appreciate the first success in quota winning level.

“Sports are of a higher position in the world of today,” reiterated the Iranian president, “what was known as sport in the past is quite different from what is granted today. It is a big symbol for the power of a nation, activeness and enthusiasm of them, especially at international venues.”

Rouhani contended that the world of today is different from the past, saying that competitions are a main part of the contemporary world and the athletes of a country represent the whole people of that country.

“Your efforts, your self-sacrifice, and your moves are carefully tracked by the whole nation,” stated the president of Iran drawing a parallel between the athletes fighting at international sport venues and soldiers defending the borders of the country.

Rouhani articulated then that Iranians should convey a message to the world, “a message of morality, peace, friendship, and coexistence.” He maintained that the message for the fellow Iranians is “hope and esprit.”