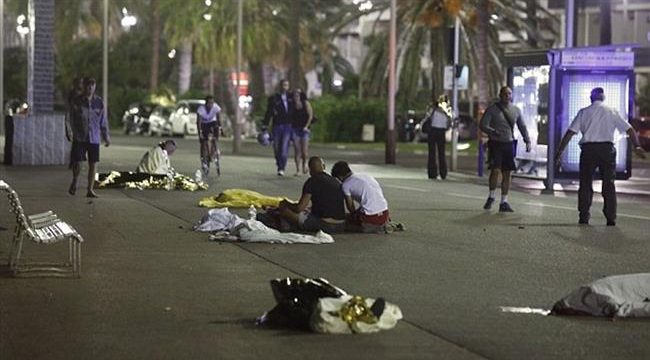 The Nice Attack: Things we dare not think about

As the state of emergency is extended in France in the wake of the recent Nice terrorist attacks, the French public is beginning to lose faith in the state’s ability to protect them. But will they ever really understand the true function of the imperial state?

On July 14th Tunisian citizen Mohammed Lahouaiej Bouhlel allegedly drove a 19 tonne lorry into a crowd of people on the Promenade des Anglais beach front in the city of Nice, France, killing 84 people and wounding 303 others.  Richard Gutjahr, a German journalist and actor who is married to former Israeli intelligence (Mossad) agent Einat Wilf, was close to the scene and filmed some of the terrorist attack.

Gutjahr’s Israeli wife, Einat Wilf is a rising star in the world of Zionism and is close to Israeli Prime Minister Benjamin Netanyahu. So, there is an important Israeli link to the storytelling of the massacre. But perhaps the Israeli link goes further. The Telegraph newspaper reported that a Jewish man did not attend the Bastille Day celebrations after being warned of the attack by his father.

French investigative reporter Eric Laurent shocked television viewers  in 2011 when he revealed in that Jews working in the World Trade Centre had been warned about the September 11th terrorist attacks in New York in 2001.

According to the Israeli press, French Jews were also warned about the Bataclan attacks in November 2015.

The Israeli government has admitted it carried out false-flag terrorist attacks in France, blaming them on Muslims.

‘Islamist’ terrorist attacks serve Zionism’s agenda of taking over the Middle East as they demonise Muslims and Arabs, thus criminalising legitimate resistance to Israeli colonialism. ‘Islamist’ terrrorism also drives the Zionist agenda, referred to by Samuel Huntington as the ‘clash of civilisations’- the idea that Muslims have no place in ‘Western civilisation’.

Although the truck slaughtered over 84 people and injured hundreds more, there was no blood visible on the published photos of the vehicle.  Perhaps there is a simple explanation for this apparent discrepancy. I hope to see a good ‘debunking’ video or article of the blood problem soon!

We are also informed that police opened up the barricades to the Promenade des Anglais minutes before the attack. There have been reports of up to four trucks in the area that day. Trucks are not authorised to drive through streets during festivals or national holidays. France is in a state of emergency! How is all of this possible?

Bouhlel, who was married with three children, was also said to have been a practising homosexual in a relationship with a 73 year old man, frequenting gay bars in the Tunisian city of Souse, where the Mossad have an office. The Mossad have increased espionage in Tunisia since the US/Israeli fomented ‘Arab Spring’ in 2011.

The truck appears to have been parked for nine hours near the Negresco Hotel, which is an infamous gay locale in Nice. There are reports that Bouhlel may have worked as a rent-boy. The identity of his 73 year old ‘partner’ remains unknown. Why?

Homosexuals, who are often the victims of child abuse, are sometimes used by intelligence agencies as double agents and patsies. The terrorist’s sister told the media he had had psychological problems. He is said to have been suffering from a nervous breakdown. Bouhlel had all the classic characteristics of an intelligence patsy.

Although the US/Israeli-created ‘Islamic State’ has been blamed for the Nice Attack, Bouhlel does not seem to have had any links with Islamist organisations. In fact, his profile is remarkably similar to that of Saleh Abdeslam, who was blamed for the Bataclan attack in Paris in 2015 and recent Orlando massacre in the USA –   a homosexual, narcotics and alcohol abuser and petty criminal known to the police.

The French people are losing faith in the government, faith in the police, faith in the system. They are beginning to understand something profound- that they are most definitely governed by incompetent fools and possibly even by psychopaths.

Medieval Christendom was characterised by the all-pervasive doctrine of fides quaerens intellectum -faith seeking understanding. The faith of the people in the transcendental authority of God as revealed in the scriptures was supplemented with increasing understanding of their meaning through human reason.

Since the French revolution the bourgeois state has supplanted divine authority and citizens are indoctrinated into the belief in state infallibility concerning observance of the principle of the rule of law.  Hitherto, there has been widespread faith in the bourgeois state and understanding of its mysteries has been copiously provided by its myriad sacerdotal institutions.  But it now looks like this holy war may be undermining people’s faith in the bourgeois order and its catechism of human rights, democracy and freedom.

It is difficult to believe the story of what happened in Nice. We are told that Bouhlel was shot dead. But another suspect was seen being arrested by police at the crime scene. Who is this  suspect? Was there a second terrorist or did Bouhlel rise from the dead? There are too many unanswered questions.

Some videos of the massacre scene posted on line appear to show dummies rather than dead bodies. The authenticity of those videos cannot be verified.  But there is little that can be verified in these terrorist attacks as the highly paid press reporters who the public believe ask hard questions and investigate terrorist attacks do not do so. On the contrary, they smugly attack and ridicule citizen journalists and Internet activists for seeking the truth.

The public is being told to believe a story for which there is scant evidence. Why should they?  Why should they believe governments who serve the interests of foreign bond-holders and bankers? Why should they trust a ruling class who, instead of fighting to raise the material, cultural, moral and intellectual welfare of the people, do the opposite, attempting at every opportunity to rob, acculturate, demoralise and stultify the masses?

In his work The Republic Plato described oligarchy as  a city-state where the rich are constantly conspiring against the poor. Aristotle in his book on Politics notes how Greek tyrants would take oaths to protect the interests of their class by conspiring against the masses and, in an era long before the surveillance systems of today, Greek tyrants would force citizens to congregate in special areas of the city so that the state could constantly spy on them.

The extraction of surplus value from labour is the primordial conspiracy against human creativity.  Is it inconceivable that terrorism would be the art of governance in a world where finance capital and the moral turpitude it engenders, triumphs over honest labour and solidarity; where enterprises of lies and war flout all laws; where the poor man is locked up for minor misdemeanours while wealthy war criminals walk free?

Is it inconceivable that such a class of people would orchestrate the most fascinorous conspiracies against the people?  Lenin described the state as the means by which one class represses another.  We live in a class dictatorship –  where those with property and power use every means necessary to keep the masses under their control. Human freedom is, as Jack London described it, crushed under an iron heel. The entire matrix of commodity production is predicated on lies and deception while man is beholden to its infinite spells and fetishisms.

In the society of the spectacle, who cares if white trucks can slaughter crowds and remain unbesmirched with blood or executed terrorists rise from the dead? Who cares if everything we are told militates against reason? The masters of discourse have a new story for the poor toilers of this world; it is short,simple and palatable enough to be consumed on a junk-food break. We need more security; more surveillance;more war; more respect for wealthy Jews, more contempt for poor Muslims. The world is run by forces beyond our control. Therefore we must submit to the all-merciful police state which is trying to protect us. Those who seek understanding before faith are terrorists.

This article was written by Gearóid Ó Colmáin for American Herald Tribune on July 20, 2016. Gearóid Ó Colmáin, AHT Paris correspondent, is a journalist and political analyst. His work focuses on globalization, geopolitics and class struggle.