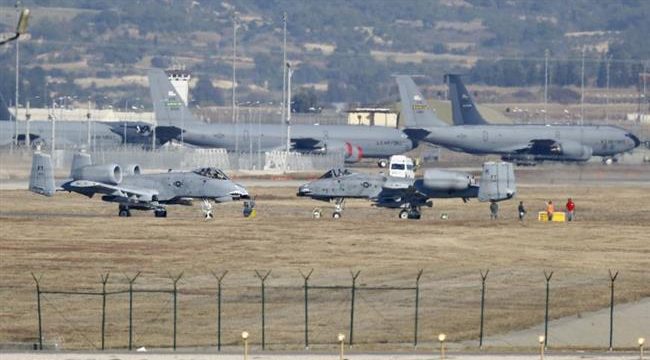 Turkey searches air base used by US army over failed coup

Turkish police investigators have entered and searched the Incirlik air base in the south of the country in connection with the recent failed coup.

According to Turkish media on Monday, seven soldiers were arrested after prosecutors and police searched the base, which is jointly used by Turkish and US-led forces to allegedly target Daesh terrorists.

The so-called multinational task force against Daesh started its controversial mission in Iraq in late 2014 after Daesh seized control over territories west and north of the country. The air campaign was later expanded to cover areas in northern Syria despite criticism from the Syrian government that the attacks violate the sovereignty of the Arab country.

Earlier in the week, the commander of the Incirlik base, General Bekir Ercan Van, was arrested along with over a dozen of his officers over accusations of complicity in the coup.

At least one of the F-16 jets commandeered by coup plotters was reportedly refueled by a plane which had taken off from the base.

Turkey has also disconnected the base’s electricity, forcing it to revert to internal power sources.

The botched putsch began late on July 15, when a faction of the Turkish military blocked Istanbul’s iconic Bosphorus Bridge and strafed the headquarters of the Turkish intelligence agency and parliament in the capital.

Tanks, helicopters, and soldiers clashed with police and people on the streets of the two main cities.

Turkey has been engaged in a sweeping crackdown on those believed to have played a role in the coup attempt which has left more than 200 people dead. Officials said more than 100 plotters were also killed until the government rule was restored on Saturday.

Meanwhile, Ankara has dismissed a total of 8,777 public personnel and arrested 7,500 suspects since the coup against the government was declared over two days ago.