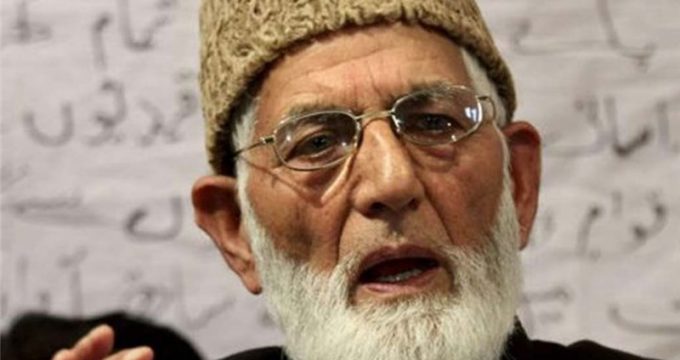 According to a report carried by the Economic Times on Sunday, Geelani in the letter has called on Iran, a number of other countries and international bodies to urge India to take confidence building measures and “accept disputed nature of J&K, repeal Armed Forces Special Powers Act and start a rapid demilitarization process immediately”.

Heads of the permanent members of United Nation Security Council, regional organizations such as the European Union, ASEAN, OIC and SAARC, China, Pakistan and Turkey have also received similar letters.

“These countries have a special responsibility to intervene to stop this reign of terror by India in J&K…create an atmosphere conducive for the resolution of the dispute of Jammu & Kashmir as per the principle of Right to Self Determination,” Geelani wrote.

The letter came after thousands of armed police and paramilitary soldiers in riot gear patrolled the streets of Srinagar, the summer capital of Jammu and Kashmir State, as well as Anantnag district in the south to enforce the curfew on Friday.

The state government has ordered restrictions on the movement of people and traffic in several parts of the valley. It said in a statement that only people involved in medical emergencies would be allowed to travel across the troubled region.

Clashes erupted after Burhan Wani, a top figure in the pro-independence Hizbul Mujahideen (HM) group, was killed along with two others in a shootout with Indian troopers on July 8.

Anti-riot troops have used live ammunition, pellet guns and tear gas to disperse the crowds and calm down the outrage over the past few days.

At least 37 people are now confirmed dead and over 2,000 others injured following days of violent clashes between protesters and Indian forces. Medical sources have expressed serious concern that a severe lack of blood donations and life-saving medicines could cause more deaths.

Kashmir has been at the heart of a bitter territorial dispute since India and Pakistan became independent in 1947.

New Delhi and Islamabad both claim the Himalayan region in full, but rule parts of it. The two countries have fought two wars over the disputed territory.

The last bout of serious violence in the scenic valley was in the summer of 2010, when more than 100 people died in anti-India protests.