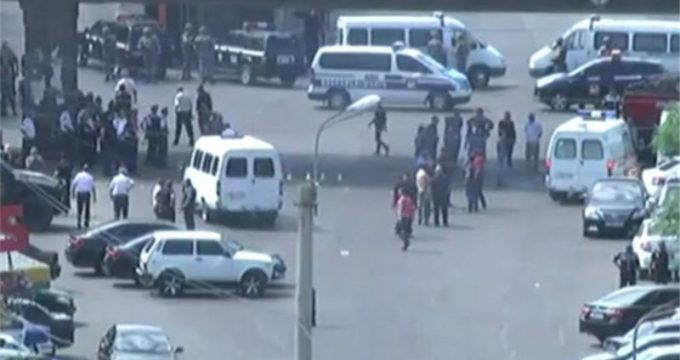 Armenian authorities have arrested nearly 200 people in the capital Yerevan after a group of armed men raided a police headquarters and took several hostages.

Armed men from the opposition group stormed the police headquarters in Yerevan’s Erebuni district at dawn on Sunday and began exchanging gunfire with the police.

A police officer was killed and two other were wounded as the gunmen held a number of hostages “under the threat of violence,” according to Armenia’s National Security Service.

Local media said police were investigating the detainees’ possible link with the armed men and the opposition group.

The gunmen said they were demanding the resignation of President Serzh Sargsyan and release of opposition leader Zhirair Sefilyan.

Sefilyan was arrested last month over alleged possession of firearms. The opposition leader has been accused in the past of plotting a violent overthrow of the government.

Sefilyan, an ethnic Armenian who was born in Lebanon and fought during the Arab country’s civil war of the 1980s, has served jail terms since 2006 on charges of attempting to overthrow the government.

He is against Sargsyan, who has been ruling the country of 2.9 million people since he won the disputed elections in 2008.