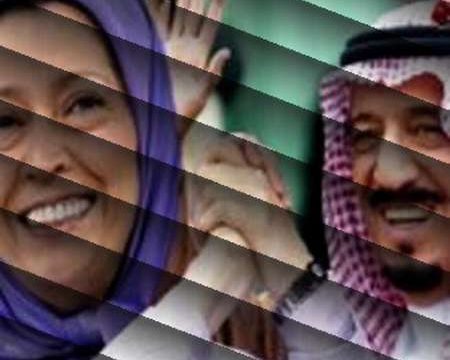 Gathering of anti-Iran opponents in Paris

Prince Turki al-Faisal’s 30-minute address to the gathering of the Mujahedin Khalq Organization (MKO) in Paris on Saturday showed that a tie-up between the outfit and Takfiri groups might be in the making with the help of the Saudis.

Perhaps the most interesting aspect of Faisal’s speech is his reference to the “late” Massoud Rajavi, the leader of the MKO. Rajavi’s wife, Maryam, has been the public face of the MKO since the 2003 US invasion of Iraq.

Some have speculated that Massoud fled into hiding after the invasion or died in the invasion.

In response to Faisal’s comments about the “late” Massoud Rajavi, the MKO continued to deny Massoud’s death. Shahin Ghobadi, spokesman for the MKO, said Faisal’s comments were “misinterpreted.” In the audio, however, Faisal refers on two different occasions to Massoud as “marhoom,” which means “late” in both Arabic and Persian.

Some media experts believing that Faisal’s reference to the “late” Massoud Rajavi induces the point that henceforth “Maryam” is not the second person of the terror organization but the first.

Since the US attack on Iraq in 2003, Masoud Rajavi has not made a public appearance and even none of his new photos have been published since then.

Condemning the MKO gathering in Paris which the terror group is the most hated terrorist group among the Iranians because of its dark history of assassinations and bombings and for siding with Saddam Hussein in his eight-year war against Iran in the 1980s, Iran believes that resorting to a “despised and demolished” group and a “stinking corpse” is a sign of “weakness and desperation.”

It is also worth mentioning that France, the so-called opponent of terrorism, has permitted a terrorist organization to hold a gathering in Paris and be freely active in this European country.

Tehran believes that permitting the officials of other countries to propagate falsehoods against an insult a third country are a violation of the principles of international law and are globally condemned and unacceptable.

Now the question is how Paris censure other countries that hold an assumptive protest rally against French satirical magazine, Charlie Hebdo, who published a blasphemous cartoon of Prophet Mohammad (PBUH)?

Iran believes that holding of this gathering by those whose hands are stained with the blood of the Iranian people and its orchestration by the father and founder of terrorist groups such as the Taliban, al-Qaeda and Daesh and the Zionists’ ally and the delivery of a lowly speech by them against the Islamic Republic of Iran on French soil are unacceptable.

Faisal’s overt pronouncement of support for the terrorist group marks a turning point in Saudi Arabia’s hostility toward Iran and the kingdom’s lack of concern about the sensitivities of the Iranians.

Under the new Saudi rulers, Riyadh has adopted an aggressive policy toward Iran and its allies which are fighting a menacing Takfiri militancy in Iraq, Syria and elsewhere.

Takfirism, which is the trademark of many terrorist groups operating in the region, is largely influenced by Wahhabism, the radical ideology dominating Saudi Arabia and freely preached by Saudi clerics.

Finally it is worth mentioning that the Saudis have become specialist in supporting the terrorist groups in Yemen, Iraq and Syria.

Now they are looking for the MKO in order to support them against Iran. It is believed that the Saudis have aligned themselves with the American line of politics for a long time and they are losers as much as the Americans are losing, maybe they have this only way in order to take revenge from Iran.