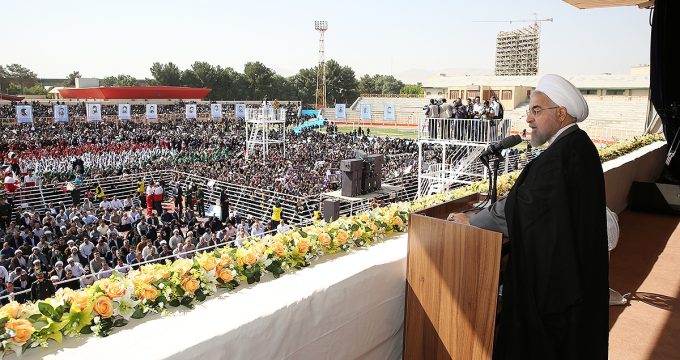 Iranian President: Election only solution to problems in Yemen, Bahrain

TEHRAN (FNA)- Iranian President Hassan Rouhani blasted resort to force and coup to make changes in the regional states, and said holding elections is the only practical solution to the current problems and unrests in Bahrain, Yemen, Bahrain and other countries in the region.

“The era of coup d’tat and use of artillery and tanks has ended and today it is just the ballot box that can resolve the problems in Syria, Iraq, Yemen, Lebanon and Bahrain,” Rouhani said, addressing a large gathering of people in the Western province of Kermanshah on Sunday.

He referred to the threats posed to the region by the danger of terrorism and Zionism, and said there only “two child-killer regimes” that are seeking to resolve their problems through terrorism and one of them is massacring the innocent Yemeni people by warplanes, an indirect reference to Saudi Arabia.

His remarks came after Iranian Foreign Minister Mohammad Javad Zarif voiced regret that certain countries, including Saudi Arabia and Qatar, were somehow interested in the victory of coup plotters against the legal government of Recep Tayyip Erdogan in Turkey.

“Our foreign minister told a closed session of the parliament today that certain states like Saudi Arabia and Qatar didn’t dislike the strengthening of the coup in Turkey, an issue which requires further contemplation,” member of the parliament’s Presiding Board Akbar Ranjbarzadeh quoted Zarif as saying on Sunday.

Meantime, another MP Gholamreza Jafarzadeh quoted Zarif as saying, “Given the Saudis’ stance on issues in Turkey, we conclude that Saudi Arabia has likely been involved in this coup.”

“Mr. Zarif said that in principle, we condemn any coup in any parts of the world and believe that people should play the role in democracy,” both MPs told FNA.

According to Ranjbarzadeh, Zarif blasted certain states for not taking a clear position on the coup in Turkey and even keeping mum on the crisis.

An attempted Turkish military coup appeared to crumble on Saturday after crowds answered President Tayyip Erdogan’s call to take to the streets to support him and dozens of rebel soldiers abandoned their tanks in the main city of Istanbul.