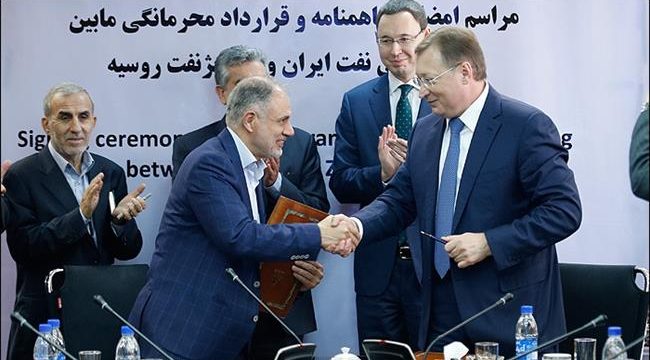 TEHRAN, Jul. 13 (MNA) – NIOC and Russia’s JSC Zarubezhneft have signed an MoU as well as a confidentiality contract over expanding two of Iran’s joint oil fields with Iraq.

The deal was sealed with the Russian firm following the inking of a confidentiality agreement between National Iranian Oil Company (NIOC) and France’s Total S.A.

Speaking on the sidelines of the MoU signing ceremony, Managing Director of National Iranian Oil Company (NIOC) Ali Kardor said the occasion marks Zarubezhneft’s first ever participation in Iran’s upstream oil industry; “NIOC has previously held partnership with the Russian company of Gazprom though no systematic cooperation in upstream sector had ever been launched before with a Russian firm.”

The official pointed to credit and capability of the Russian company in oil activities asserting “in case of reaching a final agreement, an Iranian Petroleum Contract (IPS) will be inked between the two sides with special emphasis on technology transfer as well as exploiting the most state-of-the-art equipment for developing joint fields.”

Kardor emphasized the need for technology transfer underscoring “assigning an Iranian partner by Zarubezhneft for joint collaboration would provide proper grounds for this end.”

He urged the Russian firm to establish an official bureau in Iran in order to facilitate the cooperation process stressing “NIOC is willing to cooperate in area of crude oil trade.”

NIOC managing director emphasized that technology transfer covers a range of issues including Exploration and Production (E&P), Reservoir Engineering followed by the presence of drilling companies and Engineering, Procurement, and Construction (EPC) contractors in order to provide joint venture opportunities.

“Yet, another issue pertains to constructing equipment like compressors and turbines through joint investment,” he continued.

Kardor maintained that cooperation would not be restricted to the upstream sector highlighting “in line with upstream activities, the possibility exists for trading oil products, swap as well as conducting refinery projects.”

General Director of JSC Zarubezhneft Sergey Kudryashov, for his part, pointed to his company’s 50 years of experience in energy sectors saying “we pursue the strategy to provide unique behavior towards wells of an oil field aiming to increase their efficiency.”

He outlined the adopted strategy by Zarubezhneft for developing oil field as an effective one; “continuous activity despite the fall in oil prices in the global market marks another feature of the firm.”

The Russian official said the main objective is to achieve desired results of both parties in the shortest time with detailed geological and drilling measures; “following field studies, a short-term program will be offered for boosting oil recovery.”

Kudryashov touched upon the positive political relations between Tehran and Moscow concluding “we ensure reaching deserved outcomes for both sides by moving from negotiation stage to the practical phase.”