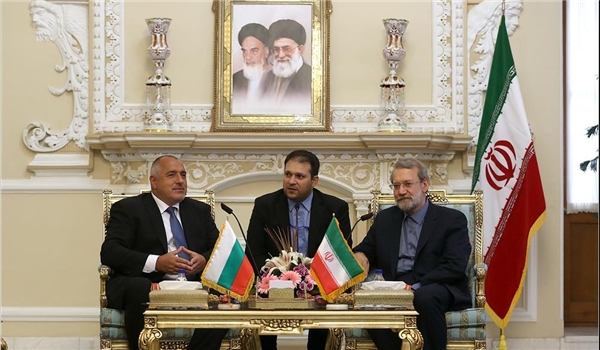 “Iran can provide sustainable energy security for Europe, but this has certain requirements and conditions that need to receive due attention from the side of Europe,” Larijani said in a meeting with Bulgarian Prime Minister Boyko Borissov in Tehran on Tuesday.

He also underscored the necessity for studying the obstacles on the way of the expansion of relations between Iran and the EU by the European states, and said, “The Europeans should take the present opportunity in the best way.”

Borissov, for his part, described the terrorism crisis as an important global issue, and said, “Unfortunately, European countries pursue an identical view of Islam and terrorism, and of course, there are many Muslims in Bulgaria who are working and making activities in the government and the country.”

“Certainly, no religion supports the actions of the terrorist groups, but certain major countries support and sponsor the terrorists,” he added.

Iranian President Hassan Rouhani underlined in May that Bulgaria has the needed potentials to help Iran gain access to the rest of the European countries, specially for energy transfer.

“Bulgaria has a superior geographical status in Southeastern Europe and it can act like a bridge between Iran and the European countries in all areas, including transfer of energy,” Rouhani said in a meeting with Bulgaria’s new Ambassador to Tehran Christo Polendakov.

The Iranian president underlined Tehran’s readiness to expand economic, political and cultural cooperation with Bulgaria, and said, “Both countries have many potentials as well as cultural and natural attractions and they should become more active.”

Polendakov, for his part, underlined that senior Bulgarian officials are resolved to consolidate relations with Iran in all areas, and said, “During my mission in Iran, I will try to broaden Sofia-Tehran relations in all areas, specially in cultural and economic fields.”