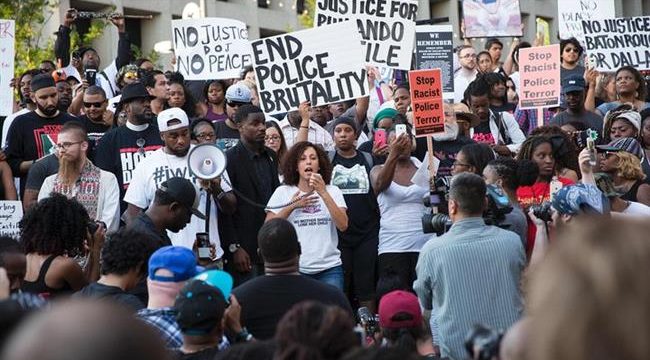 The murders of Alton Sterling in Baton Rouge and Philando Castile in Minnesota have sparked public outrage on social media and in the streets of the United States. Awareness of the ever-increasing numbers of Black Americans lynched by the police in the US has grown following the murder of eighteen-year-old Michael Brown in August of 2014.

However, police terrorism against Black people did not begin in 2014. The Black Panther Party formed in 1966 first and foremost as a self-defense organization to combat police terrorism in the Black community. The efforts of the Black movement of decades past were unable to curb the murderous nature of law enforcement occupation in Black America. In fact, Washington has been particularly silent on the issue even as the problem worsens nationwide.

In 2008, over 96 percent of the Black electorate supported Obama’s ticket in the general election. Over these eight years, police killings of Black Americans have only increased in frequency. A Black American was murdered by US law enforcement every 36 hours in 2012. In 2013, this number shrank to every 28 hours. More recent numbers fare no better. In 2015, 1,134 Black men were killed by US law enforcement. The lynching of Black Americans by the police is a national crisis, yet the Obama Administration has failed to use its executive powers to bring murderous cops to justice.

Instead, the Obama Administration’s Department of Justice has admitted that its priorities do not lie in using its prosecutorial powers to stop police terror. Department of Justice head Loretta Lynch reported to NBC in 2015 that Washington should not mandate police departments to keep statistics of its murder victims. In other words, the DOJ has made it quite clear that the most egregious police practices should not only go undocumented, but unpunished as well. However, the Obama Administration has worked tirelessly to protect the police from harms way. Obama completely ignored a bill proposed by Congressman Alan Grayson to reduce military expenditures to the police. Congress rejected the bill in 2014. In 2015, the Obama Administration signed into law the Blue Alert Act that mandates the Justice Department to create an “alert” system for assaults on the police. In complete contradiction to reality, the Justice Department now protects one of the safest “jobs” in the US.

Despite these policy decisions, President Obama has largely escaped criticism from the movement against police terrorism in the US. Most groups and organized efforts have left the Obama Administration out of the narrative around policing all together. Some have demanded low impact reforms such as body cameras and increased police “oversight.” Not one organization in the visible anti-police terror movement has blamed Washington or the Obama Administration for the crimes against humanity committed by law enforcement everyday in Black America.  The lack of criticism of the Obama Administration reveals the bankrupt character of racial politics in the United States.

The Obama Administration has been the ruling system’s most powerful Trojan horse to date. During the first half of his tenure, it was polled that Black Americans believed their economic condition was improving when the opposite was true. President Obama’s mere presence in the White House silenced the US anti-war movement. And it wasn’t until the rise of Occupy Wall Street and the Bernie Sanders phenomenon that class inequality reentered the political discourse in the US. However, Obama managed to escape public scrutiny in relation to these issues as well.

President Obama has been the quintessential ruling class candidate. His service to each and every organ of US imperial rule has not gone unnoticed by the rulers. The corporate media and the two-party corporate duopoly have played a direct role in stifling criticism of the Obama Administration. At every turn, the masses were fed the narrative that Obama was being “obstructed” by the GOP. GOP racism saturated the airwaves and sufficiently blocked from consciousness the real, material consequences of Obama’s policies.

In the 1960s, Black rebellions struck fear into the eyes of the US establishment. The establishment’s response was to militarize the police and quell dissent through the War on Poverty. In 2016, these solutions are no longer viable to an imperial system in decline. The police are thoroughly militarized. Austerity is the consensus of a world capitalist system in the midst of a severe slowdown. The Obama Administration’s primary role was to politically reign in the forces of resistance that would inevitably sprout from these conditions. And he ended up doing a masterful job of maintaining the rule of US domination despite its fragile condition.

The struggle against police terrorism is in fact a struggle against US hegemony. No mere shift in the political order of US society can truly end the genocide of Black Americans at the hands of the police. This is what Obama’s rule has taught the world. A Black President is pure symbolism and incapable of being anything but an accomplice to state terror. The house that slavery built remains in the hands of the slave owners. And Obama’s servitude to the slave owning class should not go unpunished by whatever movement should develop from the blaze of anger sweeping Black America and its allies into the streets to demand justice for those the police forced into an early grave.

This article was written by Daniel Haiphong for American Herald Tribune on July 10, 2016. Danny Haiphong is a activist and radical journalist in the Boston Area.