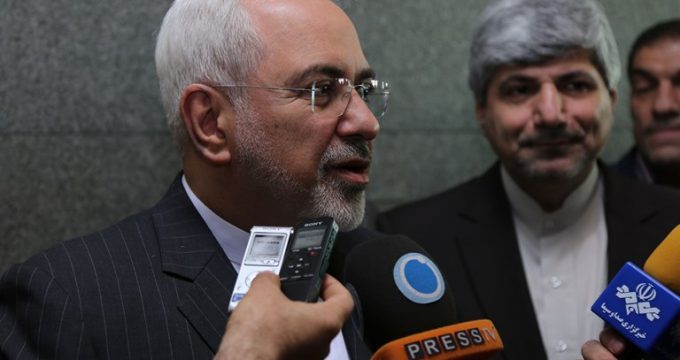 Speaking to reporters upon arrival in Kazakhstan for a ministerial meeting of the Caspian Sea littoral states on Tuesday, Zarif lambasted France for hosting the MKO terrorists’ annual gathering.

He said every year, a number of infamous political figures from different countries participate in the gathering giving a speech.

“These people have visible records. People like Bolton and Gingrich have been attending such meetings and supporting the terrorists for years, and it is not a new event and they have always been pursuing the same policy,” Zarif said.

“Unfortunately, the presence of a person who is the manufacturer of both the al-Qaeda and the Taliban and has played a highly disgraceful role in the Saudi regime’s past actions in the region (Turki al-Faisal) has drawn so much attention from the media which shows his lack of competence and wisdom as he has tied his future to the terrorists like what Saddam Hussein did,” he added.

“We condemn any positive measure or assistance to this terrorist grouplet by any government,” Nobakht told reporters in Tehran on Tuesday.

Also, on Monday, Secretary of Iran’s Expediency Council (EC) Mohsen Rezayee blasted the Saudi officials for supporting the MKO, and said Tehran is in possession of documents showing Riyadh’s involvement in MKO crimes.

“Today, our message to the al-Saud is that it takes us some time to get angry, but once we feel infuriated, we will leave no trace of al-Saud on the Earth. We take the Saudi government responsible for the assassinations carried out by Monafeqin (Hypocrites as the MKO members are called in Iran) and the anti-revolutionaries and have collected their documents,” said Rezayee, also a former commander of the Islamic Revolution Guards Corps (IRGC.

He referred to the presence of former Saudi General Intelligence Directorate (GID) Chief Turki al-Faisal in the recent MKO terrorist group’s annual gathering in Paris, and said, “He called on them (the MKO) to restart assassinations in Iran. Saudi Arabia’s official support for Monafeqin showed that all assassinations by the grouplet in recent years have been carried out by Saudi Arabia’s support.”

Rezayee said that several months ago, the Saudi officials had held similar meetings with the separatist Kurdish terrorist groups, including the so-called Democratic Party, Komala Party and PJAK (the Party for Free Life of Kurdistan), and a number of assassinations have been carried out in Iran’s Kurdistan region recently.

Also, on Sunday, Head of the IRGC Public Relations Department General Ramezan Sharif rapped Riyadh for supporting the MKO terrorist group, and said the Saudi regime is the center of all supports for terrorist groups in the region.

“The presence of former Saudi General Intelligence Directorate (GID) Chief (Turki al-Faisal) at the MKO meeting in Paris and his sympathy and companionship with them shows the age-old bond between Monafeqin (the Hypocrites as MKO members are called in Iran) terrorist group and the Saudi regime against the Islamic Revolution and the Iranian nation,” Sharif said.

“Today, it has been revealed to the world public opinion that the Saudi regime is the axis of support for the terrorist streams in the region and beyond,” he added.

“Actually, Monafeqin, the ISIL, Taliban, al-Qaeda and tens of other terrorist grouplets spread in the geography of Islam and humanity, commit the biggest crimes against humanity under the leadership and strategies of the US, the Zionist regime and the regional reactionary regimes with the extensive financial supports of the al-Saud,” Sharif said.

“We shouldn’t doubt in the extensive relations between the Saudi intelligence body and Monafeqin (Hypocrites as the MKO members are called in Iran), specially in recent years,” Amir Abdollahian, who is now an advisor to the Iranian foreign minister, said.

He referred to Faisal’s remarks in the annual gathering of the MKO in Paris on Saturday, and said, “Such comments confirm that extensive financial and security supports for terrorism have always been on Riyadh’s agenda.”

Amir Abdollahian referred to his past meetings with the Saudi officials during which he stressed collective efforts to establish security in the region, and said, “They cannot make the regional countries insecure by using the terrorists instrumentally and then keep Saudi Arabia secure.”

“Saudi Arabia should change its military and security approach in the region and play a constructive role by focusing on the political solutions and halting explicit and implicit support for terrorism,” he added.

Rumors were confirmed on Saturday about the death of MKO ringleader, Massoud Rajavi, as a former top Saudi intelligence official disclosed in a gaffe during an address to his followers.