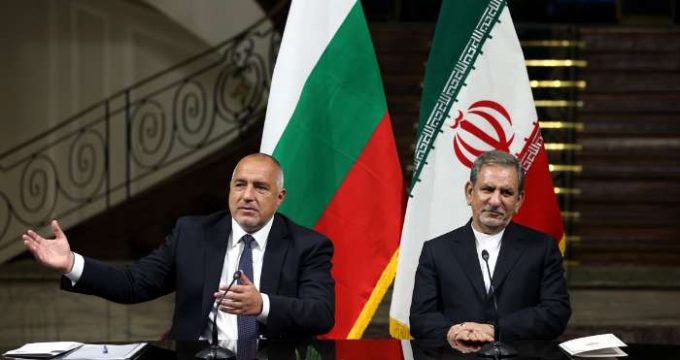 Bulgaria’s Prime Minister, on a visit to Iran, said Tehran had asked Bulgaria to join a new transport route running from the Persian Gulf to the Black Sea, bypassing Turkey.

Iran has invited Bulgaria to join a new transport corridor between the Persian Gulf and the Black Sea which would connect Iran, Armenia, Georgia and Bulgaria, Bulgarian Prime Minister Boyko Borissov announced on Monday.

He is leading Bulgaria’s first government delegation to Iran since 1988, which is in Tehran on Monday and Tuesday.

The main focus of the visit is energy cooperation as Bulgaria struggles to find a buyer of the nuclear equipment, produced by Russia’s giant Atomstroyexport for the incomplete Belene power plant project.

“This corridor can be used not only for cargo and goods but also for natural gas,” Borissov told journalists after meeting Iran’s Vice-President, Eshaq Jahangiri.

According to the Bulgarian Prime Minister, Bulgaria is ready now to take part in a new transport route using its ports in Varna and Burgas.

He explained that in two weeks’ time, experts from the four countries – Iran, Armenia, Georgia and Bulgaria  – will meet in Sofia to discuss further details about the project.

According to the government, the initiative for the creation of a new transport corridor came from Iran, which is looking for alternative routes to those crossing Turkey.

Alongside Borissov in Tehran are Bulgaria’s ministers of energy, finance, foreign affairs, agriculturem, transport, the vice-premier in charge of European funding, the vice-minister of economy and a delegation of private companies.

Iran has shown interest in the new gas interconnector between Greece and Bulgaria, which was launched earlier this year.

Tehran is also considering taking part in the planned joint Bulgarian-Greek project for an LNG terminal in the Greek town of Alexandroupoli, Petkova said.

Her talks with the President of the Atomic Energy Organization of Iran, in which Bulgaria will pitch to sell its Russian equipment to Iran, are scheduled for Tuesday.

“Europe is aware of the conversations we are having now. If Iran’s nuclear program is directed only for civilian use and we have an interest in such cooperation, then Europe has no problem with that,” Focus news agency quoted Foreign Minister Daniel Mitov as saying.