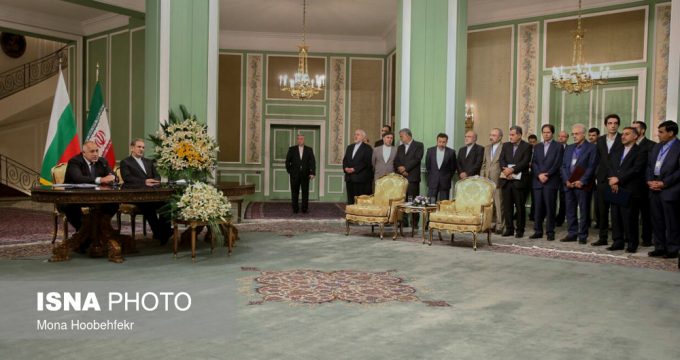 TEHRAN (FNA)- Bulgaria said it plans to help Iran resolve its banking problems with the European countries as it is willing to launch joint nuclear cooperation with the Middle-Eastern nation.

“The Bulgarian foreign and finance ministers will help resolve the banking problems in Europe and I have taken up the pledge to make the European leaders familiar with the banking problems (and settle them) with the help of my colleagues, specially the foreign minister,” Bulgarian Prime Minister Boyko Borissov told reporters in a joint press conference with Iranian First Vice-President Eshaq Jahangiri in Tehran on Monday.

Stressing the need for the further expansion of relations with Iran, he said, “We have also held talks on other issues of mutual interest, including the nuclear energy, the capacities existing in this regard and (building nuclear) reactors.”

He said certain states are sabotaging the execution of nuclear deal between Tehran and the world powers, also known as the Joint Comprehensive Plan of Action (JCPOA).

Mogherini for her part said Europe is keen to revive its relations with Iran, adding that closer ties between Iran and European parliaments could be very helpful in this regard.

Saying that Iran has been bound to its obligations, she voiced hope that other parties to the talks would be committed to their obligations too.

Mogherini underlined that Europe wants a sustainable agreement with Iran that would lead to concrete economic and political results.

“There is political will in the US for resolution of banking problems of Iran and EU is doing its best to resolve it,” she added.

Iran and the EU issued a joint statement at the end of Mogherini’s meeting with Iranian Foreign Minister Zarif in April on how to further the two sides’ cooperation in trade, culture, education, tourism, economy, energy, transport, construction, science and technology.