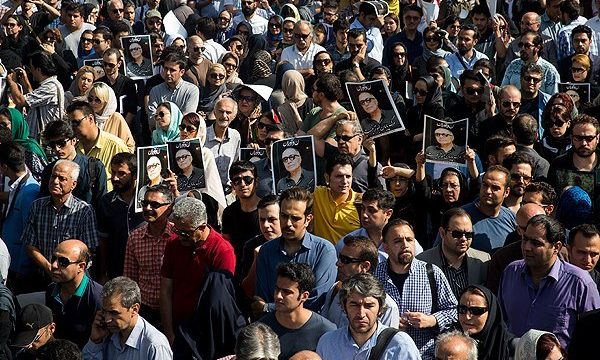 A large crowd of people and Iranian artists, directors, actors and actresses took part in the funeral ceremony.

Kiarostami died last Monday in France where he had been receiving treatment for cancer. The 76-year-old award-winning scholar succumbed to a stroke in Paris few days after leaving Tehran.

In March 2016, Kiarostami was diagnosed with gastrointestinal cancer, following which he underwent a series of operations.

Kiarostami wrote and directed dozens of films over a career spanning more than four decades. In 1997, his film “Taste of Cherry” won the prestigious Palme d’Or at the Cannes film festival.

In his late years, Kiarostami started to travel the world, making “Certified Copy” in Italy and “Like Someone in Love” in Japan.

Referring to his travels, he said he was attempting to make a narrative about “universal characters that can be accessible to everyone.”