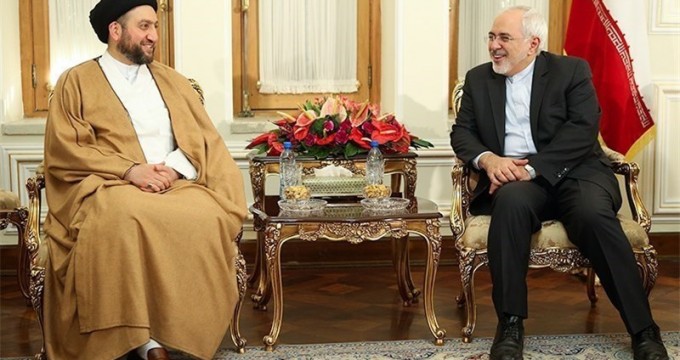 The Iranian foreign minister has called for a stronger unity among various Iraqi groups as the key to defeat the Takfiri terror groups wreaking havoc in the Arab state and elsewhere in the region.

In a meeting with visiting Chairman of the Islamic Supreme Council of Iraq (ISCI) Ammar Hakim in Tehran on Sunday, Mohammad Javad Zarif said Iran would stand by the Iraqi nation until the Arab nation is fully cleaned of terrorist groups.

Zarif further hailed the recent victories of Iraqi army and allied fighters on the battlefield against Daesh, saying the ultimate defeat of the terrorists depends on a strong unity among different political factions and sects both inside Iraq and other regional countries.

The top Iranian diplomat censured the recent wave of Daesh-claimed bomb attacks that have left hundreds of Iraqis dead in recent days, expressing sympathy for the Iraqi nation and government.

Hakim, in turn, briefed the Iranian foreign minister on the latest developments in his country, thanking Iran for supporting the Iraqi nation in the battle against terrorism.

He said unity between Iraqi army troops and allied volunteer fighters played a significant part in the latest gains against Daesh, adding the terror group is on the brink of total defeat.

The Iraqi official described dialog as the only solution to regional issues, adding that the instrumental use of terror would lead nowhere.

Daesh has swathes of land under control in Iraq since early 2014.

Iraqi government forces and fighters from Popular Mobilization units have made significant gains against the terror group in recent months.

Iran has been offering advisory assistance to Iraqi forces at the request of the Baghdad government.

During the meeting, Shamkhani vowed that Tehran will not give up its advisory support for Iraq and Syria until the full elimination of terror threats gripping the region.