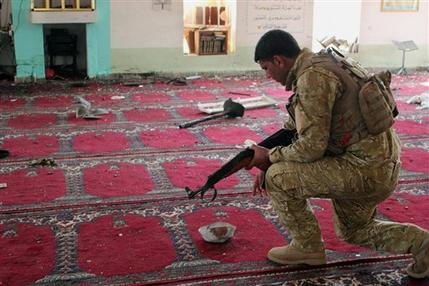 Weapons of mass deception: Chilcot and the aftermath

The Chilcot report eventually came out, recriminations were thrust and tears were shed at the Apocalypse Iraq that was orchestrated. Yet a horrific realization also came to bear, that Tony Blair has and will continue to get away with the actions he took regarding the Iraq war. He has not been specifically blamed for the failures that occurred in the expensive (therapeutic?) report and clearly is not perturbed by its contents, which were vetted well in advance by him and his cadre of lawyers. Indeed I suspect he has been aware of the key findings for some time prior to release, hence his sudden increased presence in the public eye in recent weeks.

Blair remains untouched and unrepentant for his lies and the damage they caused, and continues his shameful facade of being a man of integrity. In fact, he will probably be able to increase his fee for public speaking after this £800 a day, delayed report.

Throughout the day, I’ve turned on the TV to see Alistair Campbell desperately spinning to an inch of his life, invoking 9/11 and mentioning David Cameron supported Blair’s war while sticking to the now disproved totally idea people were not ‘misled’, or lied to as you or I would say.

We need to find out if the House was lied to. We need to do whatever we can to hold not just Blair to account, but the likes of Campbell. I don’t care if Alistair Campbell or Tony Blair has had 13 years of restless nights, they didn’t have to cope with a loved one being killed because Tony Blair was desperate to keep on George Bush’s side and wasn’t prepared for a war that wasn’t needed.

Anyone trying to defend Blair from now on stands on the side of someone who has the blood of hundreds of thousands on his hands and didn’t care of the consequences.

Surely there must be consequences for him now – public appetite for political accountability is stronger now than ever before, witnessed by the increased amount of engagement.

Blair at the very least should be expelled from the Labour party and any and all ties to him should be cut – familial, Progress Group and any staunch supporters that still hold MPs positions should be deselected.
The man is toxic and should be treated as such.

Chilcot makes clear that happened with the Iraq invasion is just one instance of fitting up reasons to go into countries and effect regime change. Iraq had been getting softened up for years in preparation for it.

This has played out in so many countries now, for many decades, and is still ongoing today. The NGOs are always there, setting the groundwork, stirring up dissent. The overthrow goes either soft or hard, but it goes until the powers that be get what they want, and all too often that is gotten on a pile of innocent civilian bodies and needless servicemen sent to safeguard oblivion.

Pretexts are routinely manufactured. Iraq wasn’t an anomaly, it was business as usual. The modus operandi, in the perpetual race to tie up the resources of other countries, is what gives rise to refugee and migrant flows and terrorism. Terrorism gets used to justify more of the same sort of behaviour.

Blair’s moral rectitude and integrity would carry a bit more weight if he hadn’t spent his entire post-prime ministerial career shopping himself around to every autocracy and dictatorship going that needs some help greasing the wheels of diplomacy. He has become some sort of greying spectre in a mini-dress and too much slap at the First Class Lounge of international dark power – a leering businessman still out there under the red lights for the hard men who come and go with their weapons contracts, confidentiality agreements, export licenses and shipping manifests.

It must be so tough for those who thought Blair was the answer to everything, who lauded his power without principle approach, and attacked any other part of the Labour Party for not getting down and kneeling to the presence and shades of Blair.

Perhaps liberal commentariats like The Guardian will now at long last stop supporting this failed concept. Perhaps they will stop whitewashing any opinion that dares to break the myth or argue against their ‘lead journalists’ proclamations of God Head for all things Blair.

The great sadness is that we unleashed Hell on the people of Iraq, killing hundreds of thousands (and that’s very conservative a number), without reason or benefit remotely commensurate to their suffering (what could be?) on the basis of next to nothing that couldn’t be dealt with otherwise, and that we sent thousands of UK and US service people to death and life-altering injury on that same flimsy-to-absent basis. All of that suffering, all of it, was unnecessary and in vain. Actually, sadness is too small a word, it is a disaster, a cataclysm, a shattering catastrophe, among the worst things, and arguably the worst, thing in which this country has ever been involved as an actor.

The thing is so great that we can never atone, we can never repay, we can never put right. We will look back on those few months in 2003 and recognise the point at which our world changed for many generations, perhaps forever.

There are no words that can fully express the immorality, and total lack of humanity and conscience shown by Tony Blair and George W Bush. Jeremy Corbyn had every right to condemn Blair for a war he and millions did not support but was waged in our names. Corbyn must, however, ensure that he never forgets that this situation is about the forces and Iraqis, who never asked to be invaded, who have died and been maimed as a result and the continuing conflicts in the area.

He needs to avoid falling into any political point scoring because of his loathing of Blair. Those Labour MP’s who were grinding their teeth in frustration at Corbyn need to stop and acknowledge the faults of Blair and their own terrible misjudgement in voting for the war, if they did.

“I’ll be with you, whatever” he said. Perhaps our serviceman were told this too. The motivation, however, was probably very different from the lips of the man who spoke those chilling words.

This article was written by Saurav Dutt for American Herald Tribune. Saurav Dutt is the Guardian Books and LA Times Book short-listed British author of fiction and nonfiction works. He wrote for The Guardian, The Independent; he is a novelist, independent film producer, playwright, screenwriter, graphic design illustrator and above all, an accomplished author and writer.