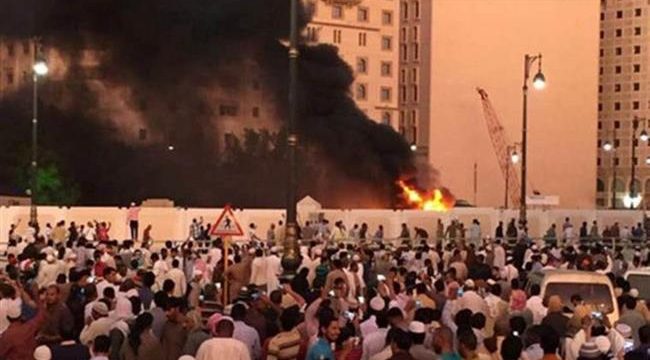 Saudi authorities say they have arrested seven Saudi nationals and 12 Pakistanis in connection with the recent bomb attacks in the city of Medina and the eastern region of Qatif.

Saudi Arabia’s Interior Ministry, in a statement released late on Thursday, identified the Medina bomber, who carried out his attack near Masjid al-Nabawi, the second holiest site for Muslims, as 26-year-old Saudi national Na’ir al-Nujiaidi al-Balawi.

The statement added that Balawi, who had a “history of drug use”, crossed a parking lot next to Masjid al-Nabawi and detonated an explosive belt near a security headquarters, leaving four soldiers dead.

“When security guards intercepted him he blew himself up,” an unnamed Interior Ministry spokesman told state-run al-Ikhbariya television news network.

Several cars went up in flames, and thick plumes of black smoke were seen rising from the site of the attack.

Local media say the attacker planned to target the sacred site as thousands had gathered for the sunset prayer on the last day of the holy Muslim fasting month of Ramadan.

The Saudi Interior Ministry further named the three bombers behind an attack outside a Shia mosque in Qatif as Abdulrahman Saleh Mohammed, Ibrahim Saleh Mohammed and Abdelkarim al-Hesni. No civilians or police were wounded in the second Monday attack.

Saudi officials claimed the assailants were all in their early 20s and had earlier taken part in anti-regime rallies.

None of them had obtained Saudi identification cards, and it was not immediately clear what country or countries the trio hailed from.

On Tuesday, Saudi authorities identified another bomber, who targeted the US consulate in the Red Sea port city of Jeddah the previous day, as 34-year-old Pakistani Abdullah Qalzar Khan. They said the man was living in Saudi Arabia with his wife and parents-in-law.

Even though no group has yet claimed responsibility for Monday’s apparently coordinated attacks, they bear the hallmarks of those carried out by the Takfiri Daesh terrorist group.

In a speech marking Eid al-Fitr, the end of the holy Muslim fasting month of Ramadan, King Salman bin Abdulaziz Al Saud warned his country of the dangers of religious radicalization.

He noted that Riyadh “is determined to strike with an iron fist all those who want to harm the spirit and orientation of our youth.”