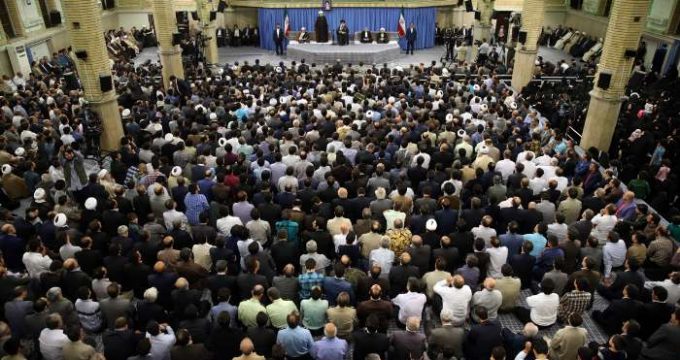 TEHRAN (Tasnim) – Leader of the Islamic Revolution Ayatollah Seyed Ali Khamenei described the issue of Palestine as the prime concern of the Muslim world, saying the world’s arrogant powers, spearheaded by the US, provoke regional conflicts to make Israeli occupation of Palestine fade into oblivion.

The root causes of wars, insecurity and terrorism in the region and in the Islamic world are the arrogant powers, with the US at the top, Ayatollah Khamenei said on Wednesday, in a gathering of Iranian officials and people as well as ambassadors of Islamic countries, held in Tehran after the Eid al-Fitr prayers.

“They (arrogant powers) seek to deny the existence of a geography and a nation, whereas Palestine has a thousands-year history and the Palestinian nation also owns a land, and these facts are undeniable,” the Leader underscored.

“Palestine is the Islamic world’s pivotal issue, and no Muslim and even non-Muslim country with human conscience should forget it,” Imam Khamenei added.

The Leader also emphasized that the Zionist regime of Israel will be “definitely given a slap in the face” for its atrocities against the beleaguered nation of Palestine.

Elsewhere in his remarks, Ayatollah Khamenei decried insincere claims about fighting terrorism, saying that world powers are “supporting and fostering terrorism in practice”.

Making a reference to a US plot that turned a political turmoil in Syria into a civil, fratricidal war, Ayatollah Khamenei warned of the same scenario in Bahrain.

The Leader, however, made it clear that “Iran has not and will not run any interference in Bahrain’s affairs.”

“But if there is political awareness and wisdom in that country (Bahrain), they should not allow a political conflict to turn into a civil war, and should not pit the people against each other,” Imam Khamenei stressed.

Bahrain, a close ally of the US in the Persian Gulf region, has been witnessing almost daily protests against the ruling Al Khalifa regime since early 2011, with Manama using harsh tactics to silence the protests.