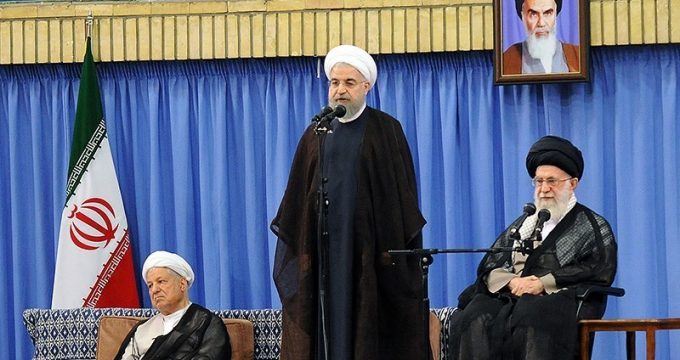 Tehran, July 6, IRNA – President Hassan Rouhani said on Wednesday that the Islamic Republic of Iran is determined to fully back oppressed nations as well as holy shrines of Ahl al-Bayt.

The Islamic Republic of Iran has never turned a blind eye to problems of the world of Islam and has neither avoided adopting a neutral stand to the issue, said President Rouhani, adding that Iran will spare no efforts to defend the oppressed nations who seek the country’s help.

Rouhani made the remark in an address to a group of country’s officials and ambassadors of the Islamic countries, residing in Iran, as well as people from all walks of life, who met with the Supreme Leader of the Islamic Revolution Ayatollah Seyyed Ali Khamenei in Tehran.

Expansion of terrorism, violence, carnage and displacement of people in many Islamic countries regarded as a mishap for the Muslim world as well as the Islamic community, President Rouhani said.

Once, Muslims were concerned about displacement of Palestinian people and then Afghan people were added to the list but regretfully a number of Islamic countries suffer carnage and displacement of their people , he said.

People in Iraq, Syria, Libya and other Islamic states should have been happy with smile on their lips during this Islamic festivity but they are now crying over bodies of their martyrs and displacement of their nations, he said.

Heads of Muslim state and those failed to identify the mishap should now understand that terror and terrorism have no boundaries or nationality, added the president.

Those who assumed to make instrumental use of the issue of terrorism now understand that terrorism threatens the world Muslims, Rouhani announced.

Islamic Republic of Iran never ignores the problems of the world of Islam and never takes a neutral stand towards them, underlined President Rouhani.