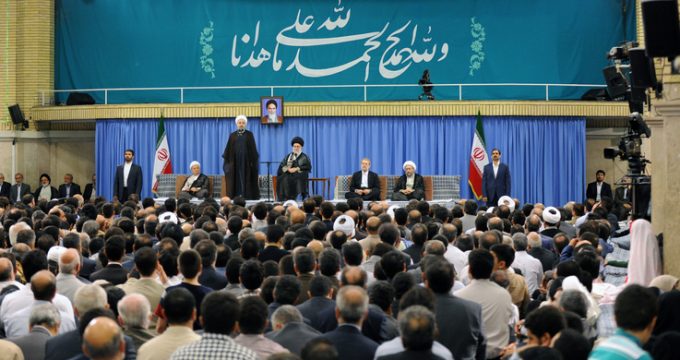 TEHRAN (Tasnim) – Leader of the Islamic Revolution Ayatollah Seyed Ali Khamenei on Wednesday renewed a call for serious and indiscriminate action on astronomical wages of some officials, warning that, otherwise, the issue could erode the public trust in the Establishment.

In an address to a huge gathering of people after the Eid al-Fitr prayers in Tehran, Imam Khamenei slammed the payment of astronomical salaries to some officials as “unfair and unjust”, saying the illegitimate withdrawal of money from the country’s assets is a sin that amounts to treason against the Islamic Revolution’s aspirations.

The Leader said countering the payment of illegitimate salaries should continue vigorously, stressing that those payments must be reimbursed, the violators of law should be punished and those abusing the regulations should be dismissed, because they do not deserve to serve in the posts.

Warning against the enemy’s attempts to use the issue of salaries as an excuse to damage the Islamic Establishment, Ayatollah Khamenei underlined that lack of action on the case will erode the public trust in the Establishment, which would be a catastrophe.

Over the past weeks, cases of astronomical salaries earned by some senior managers have attracted a great deal of media attention and had a negative impact on public sentiment.

Imam Khamenei has called for firm action to halt payment of inflated salaries and punish the wrongdoers.

Elsewhere in his remarks on Wednesday, the Leader lashed out at the arrogant powers for instigating wars and spreading terrorism in the region, saying their purpose is to consign the issue of Palestine to oblivion.

The leader then blamed the intelligence services of the US, Britain and the Zionist regime of Israel for fostering the terrorist groups that commit crimes in the region.

Today’s Eid-al Fitr prayers in Tehran were held at the Grand Prayer Grounds (Mosalla), attended by thousands of people.

Iranians are celebrating the Eid at the end of the holy Muslim month of Ramadan.