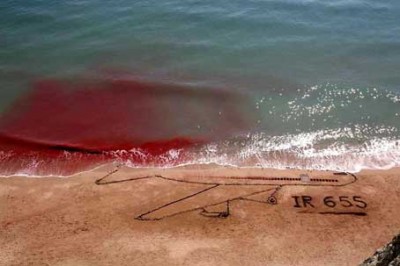 A senior naval commander dismissed claims that the US Navy had shot down an Iranian civilian plane in July 1988 as a result of a mistaken identity or system malfunctioning.

“The radars of missile-launching destroyers are equipped with the Identification, Friend or Foe (IFF) system which shows the type of flying planes, clearly differentiating warplanes with commercial flights,” said Rear Admiral Nasser Sarnevesht, who was the commander of rescue and search operations for the passengers on board Iran Air Flight 655.

“Identifying an Airbus passenger plane was easy for an advanced warship like the USS Vincennes,” he told Fars News Agency on Saturday.

Sarnevesht reiterated that the claim that the Vincennes, a cruiser equipped with the most sophisticated radar and electronic battle gear in the US Navy’s surface arsenal, blew out a defenseless passenger plane from the sky with two missiles due to some error, is simply implausible and nonsensical.

The airliner was flying from Bandar Abbas in south Iran to Dubai on July 3 1988, with 290 passengers onboard when it was shot down by the Aegis-class cruiser. All passengers, including innocent women and children, lost their lives on that tragic day that history and posterity will never forget.

The incident prompted Tehran to file a suit at international bodies, including the United Nations. Despite unequivocal evidence that the attack was intentional, world bodies ignored the facts.

The UN Security Council met two days later and a speech by then foreign minister Ali Akbar Velayati informed world public opinion about the bland lies and fiction of the official US stance.

Although Iran went to the UN and the International Civil Aviation Organization, both adopted a politicized attitude and declined to follow up the case despite their legal obligations. They sufficed with some bland expressions of sympathy with the families of the victims.

In a bid to limit the negative impact of its unbelievable American military violence, Washington claimed the ship mistook the large Iranian passenger plane for a relatively small fighter jet that intended to target the Vincennes.

Former US president Ronald Reagan praised the unforgivable crime of the commander of the USS Vincennes and also decorated him with a medal. But in an interview later he admitted that the American missile cruiser mistakenly brought down the civilian passenger plane.

Iranians mark July 3 each year by showering the site of the disaster in the Persian Gulf with flowers.