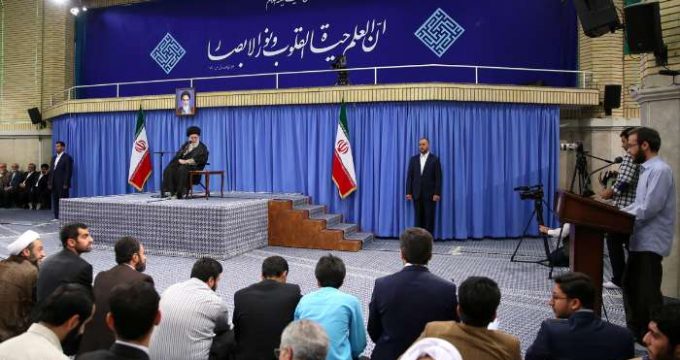 Iran not to coordinate with US as it aims diminish Tehran’s regional presence: Leader

Alwaght- Leader of Islamic Republic of Iran, Ayatollah Seyyed Ali Khamenei, rejected claims of Washington pertaining to its willingness to engage in talks with Tehran over regional issues.

In a meeting on Saturday evening in the Iranian capital Tehran, Ayatollah Seyyed Ali Khamenei received a group of university students and representatives of student societies giving the students the opportunity to openly express their opinions and demands as well as discuss major issues in the country.

While addressing the students, the Leader dismissed claims made by Washington pertaining to its willingness to engage in talks with Tehran over regional issues.

Ayatollah Khamenei said that Tehran is not interested in such coordination as the US’s main goal is to diminish Iran’s presence in the region.

Leader of the Islamic Revolution also underlined that “the origin and identity of the Islamic Establishment” are the main targets of the enemies of the Iranian nation.

“The Islamic Establishment means a set of the Establishment’s structure and its values and objectives such as justice, scientific progress, ethics, democracy, the rule of law and idealism,” Ayatollah Khamenei stated, elaborating on different aspects of the identity of the country’s Establishment.

The Leader further emphasized that in the fight against enemies, there are big problems, which can be resolved through resistance and prudence, adding, “In the path to the resolution of the problems, students, as the extracts of the nation’s capabilities, have a special role and position.”

Elsewhere, Ayatollah Khamenei praised rallies held across the country on the occasion of the international Quds Day, saying that the massive presence of the people in the rallies in the hot weather of the summer was “truly a unique phenomenon” which was ignored by hostile media outlets.

Millions of fasting Iranian people took to the streets on Friday to attend nationwide rallies to express solidarity with the Palestinian people, who have been suffering from Israel’s atrocities for decades.

Venting their anger on the Tel Aviv regime and its allies, demonstrators call for an end to the Israeli occupation of Palestine, Judaization of the holy city of al-Quds and construction of Israeli settlements across the West Bank.

Carrying placards and chanting slogans against Israel and the US, marchers voiced their support for the people of Gaza and the West Bank, and reiterated their opposition to the occupation of the Palestinian territories by Zionists.

The International Quds Day is marked annually on the last Friday of the Muslim fasting month of Ramadan as designated by the late founder of the Islamic Republic, Imam Khomeini.

Ayatollah Khamenei also warned that if the students fail to have insight or exercise vigilance, they may have miscalculation in analyzing current regional and international developments.

The Leader then called on the student associations to establish “a ‘unified anti-US and anti-Zionist front’ among Muslim world’s students”.

“By using advanced means of communication and in cyberspace, general campaigns can be formed by Muslim students based on the opposition to the policies of the US and the Zionist regime of Israel so that when needed, millions of young Muslim students create a big movement in the Islamic world,” the leader added.