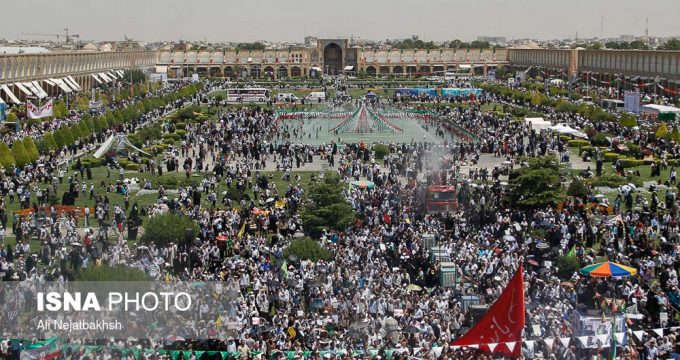 Iran threatens to publish Hajj contract with Riyadh if necessary

If it is needed, Iran will publish the contract with Saudi Arabia about this year’s Hajj ritual, the head of Hajj and Pilgrimage Organization of Iran said.

Iran calls for a world free of chemical weapons

Iranian President Hassan Rouhani has called for firm judicial action against the individuals involved in raids on Saudi diplomatic perimeters in two Iranian cities back in January.

The judiciary system should put on its agenda pursing the case of Iran’s violated rights during the sanctions, says Leader of the Islamic Revolution Ayatollah Seyyed Ali Khamenei.

Despite the “mythical” Iranian nuclear threat becoming a thing of the past, ballistic missile defense is still being built in Eastern Europe, President Vladimir Putin said.

Millions of Iranians have taken to the streets in all Iranian cities across the country on the International Quds Day on Friday to voice support for the Palestinian nation against the Israeli regime.

Indications are growing that London could soon decide to drop sanctions to expand its trade with Iran in the wake of the recent vote by the British to quit the European Union.

Fajr Jam Gas Refinery exported all of the natural gas it processed into liquefied petroleum gas (LPG) during the first three months of the current Iranian calendar year which began on March 20.

Daimler says its trucks division will start the deliveries of Mitsubishi Fuso brand in Iran later this year.

President Hassan Rouhani has accepted the mass resignation of those on the board of trustees of Iran’s sovereign wealth fund as revelations about high compensation packages at state-owned firms take new casualties.

Millions of people in Iran are marking the anniversary of the martyrdom of the first Shia Imam, Imam Ali ibn Abi Talib (PBUH), who passed away on the 21st day of the holy fasting month of Ramadan some 14 centuries ago.

The city of Sardasht is the third city in the world after Japan’s Hiroshima and Nagasaki which became the target of Weapons of Mass Destruction. In June 28 and 29, 1987, Iraqi bombers attacked 4 crowded parts of Sardasht with chemical bombs and engulfed its residents, women and children, young and old, with fatal chemical gases.

Leader of the Islamic Revolution Ayatollah Seyyed Ali Khamenei attended the mourning ceremony for the martyrdom anniversary of the first Shia Imam Ali (AS) in the capital Tehran on Monday.

Following an internal review, the Chinese-derived SAIPA’s Ario sedan has been announced as the new entrant to join the capital’s taxi fleet.

Iran is marking the 28th anniversary of the downing of its commercial airliner by a United States Navy guided-missile cruiser back in 1988 as the aircraft was flying in Iranian airspace, and over Iran’s territorial waters in the Persian Gulf.

The Asian Football Confederation (AFC) has punished a Saudi Arabian club over the misbehavior of its fans toward an Iranian team, a report said.

At least 36 people have been killed and 147 more injured in a gun and bomb attack in Istanbul’s Atatürk international airport.

Alwaght- Iran’s President Hassan Rouhani has called for massive turnout nationally and globally in rallies marking the International Quds Day on the last Friday of Holy month of Ramadan.

President Hassan Rouhani said on Friday that Palestinian nation will never remain alone and it will certainly achieve victory in the wake of resistance.

The Kremlin said on Friday it did not rule out that Russian President Vladimir Putin and his Turkish counterpart Tayyip Erdogan could meet before a G20 summit scheduled for September in China.