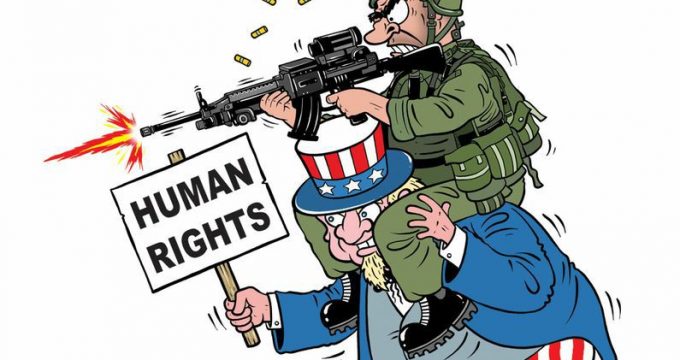 ‘US hides its real face behind human rights slogans’

July 3, The Iran Project – An Iranian Member of Parliament says Americans project their own internal problems by human rights claims.

Speaking to a reporter on Sunday, Abulfazl Hassan Beigi, Second Vice-President of Majlis National Security and Foreign Policy Commission referred to the history of the US inhuman actions against different nations and said the Americans project their own internal problems by human rights claims, adding that they try to hide their real face behind human rights slogans.

Americans use human rights as a means to deceive the US and world’s public opinion, Hassan Beigi stated.

He also pointed to the Iranian nation’s rights that have repeatedly been violated by the US, stressing that it’s  time to challenge them and reveal their real face to the world.

Elsewhere in his remarks, he urged those who still stand on the US side to be more vigilant.

Asghar Abkhezr, Deputy Head of Islamic Propagation Coordination Council described America as the number-one enemy to the Iranian nation, humanity, international peace and security and violator of  human rights in Iran and the world.

Due to numerous violations of human rights by the United State, Supreme Leader of the Islamic Revolution Ayatollah Seyyed Ali Khamenei suggested holding American human rights week in Iran from this year.