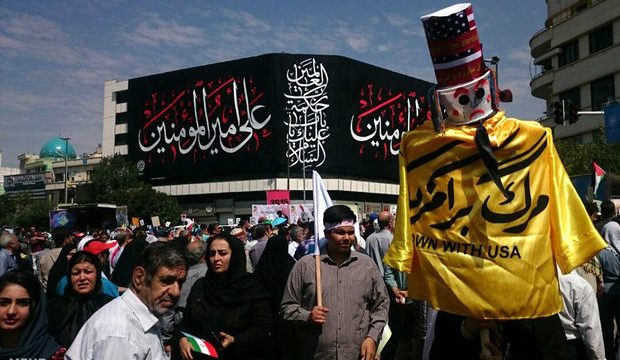 TEHRAN (FNA)- Millions of Iranians have taken to the streets in all Iranian cities across the country on the International Quds Day on Friday to voice support for the Palestinian nation against the Israeli regime.

Iranians across the country, including in the capital Tehran, alongside other people around the world are holding massive anti-Israel rallies on the last Friday of Ramadan in opposition to the continued occupation of the Palestinian land by Israel.

International Quds Day is an annual event opposing Israel’s occupation of Beitul-Muqaddas. Anti-Zionist rallies and demonstrations are held on the last Friday of Ramadan in Muslim and Arab countries around the world, and especially in Iran.

Iran Tehran, demonstrators chant slogans in condemnation of the Zionists’ crimes in the occupied Palestinian lands.

The fasting people are carrying placards, and chanting ‘Down with the US’ and ‘Down with Israel’.

Demonstrators are also stressing their readiness for defending the Palestinian cause.

They are also shouting protest against the silence shown by the international community and the so-called advocates of human rights against the crimes committed in the occupied lands.