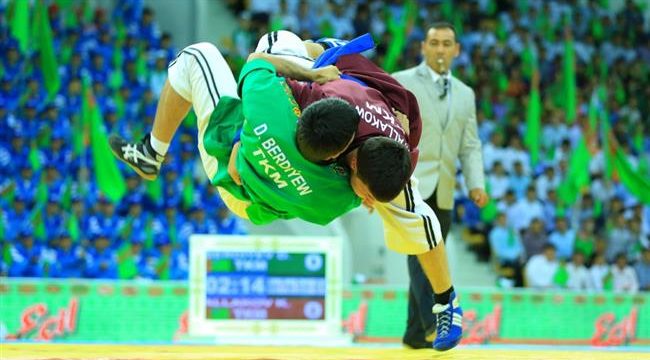 On Monday, Iranian athlete Amir Chadorneshin took part in the men’s 82-kilogram weight category contests at the Martial Art Complex of the Olympic Stadium in Ashgabat. He finished third to win the bronze medal.

Abdulnaser Kor also vied for the top honor in the over 100-kilogram weight division. He also won the bronze medal.

Ne’matollah Jorjani and Karim Jajagh also added to bronzes to the Iran’s medals in the 62-kilogram and 92-kilogram sections.

The Asian Goresh and Belt Wrestling Championship started on June 25 and will wrap up on June 30.

Wrestlers from sixteen Asian countries, including Iran, Kazakhstan, Kyrgyzstan and Uzbekistan, are participating in the event.

The Turkmen national wrestling goresh is a kind of wrestling on belts that has ancient roots, and dates back to as early as the 3rd century BC. Wrestlers need to earn points by forcing the opponent to touch the mat with any part of the body except a foot.

Goresh competitions are staged in four formats, namely round, shootout, mixed and team.

During the round format contests, athletes compete with all wrestlers in the same weight category. If there are many wrestlers in one weight division, the participants are divided into two groups. Wrestlers who earn the first and second places in each group will be in action for the final showdowns.

Wrestlers are eliminated from the rest of competition once they lose in the shootout format.

In the mixed format, wrestlers start with the round format for the preliminary round and then shift to the shootout format.

According to the team format, only one athlete from each weight category of a team is allowed to participate. Participating teams will fight one-on-one in the competitions.