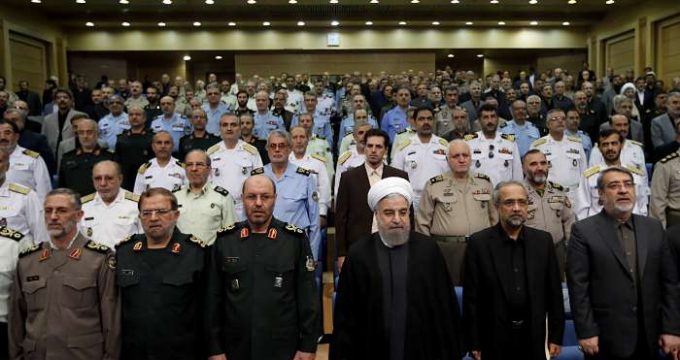 Iran will never invade another country, will defend itself decisively: Rouhani

Iranian President Hassan Rouhani says the Islamic Republic will never use its military might to invade another country but will decisively defend itself against any potential aggression.

“The Armed Forces of the Islamic Iran have never thought of and will never think of violating others’ rights but are determined to defend [the country] decisively,” President Rouhani said at an Iftar ceremony with commanders and high-ranking officials of the Iranian Armed Forces on Tuesday night.

“The Islamic Republic’s Armed Forces are firmly standing against the enemies, and will always maintain their readiness,” he said.

The Iranian president emphasized that his administration will do its best to help enhance Iran’s defensive power.

He said the Iranian people appreciate the fact that the state of security in Iran — located in the middle of a highly insecure region — is beholden to the readiness of the Armed Forces.

Referring to insecurity in the neighboring countries, President Rouhani said Iran fights those groups that are after disrupting the security of the region, emphasizing, however, that the Islamic Republic has no intention to meddle in the affairs of other countries.

The security of regional countries is intertwined, the Iranian president said, adding that Iran deems it its duty to help other countries achieve and maintain security.

Iran has been offering advisory military assistance to Iraq and Syria, both of which are battling terrorist campaigns by the Takfiri Daesh terrorist group, among other terror outfits.

“What we wish for all [our] neighbors is what the people of those countries wish,” he said, adding, “In each country, democracy and the rule of the people should prevail.”