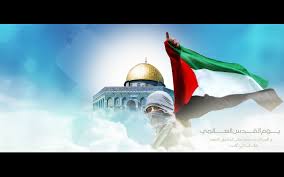 TEHRAN (Tasnim) – A Lebanese academic hailed late founder of the Islamic Republic Imam Khomeini for declaring the last Friday of the holy month of Ramadan as the International Quds Day, saying the initiative stymied plans by some countries for normalization of relations with Israel.

In an interview with the Tasnim News Agency, Mohammad Tai, a professor at the University of Beirut, said Imam Khomeini’s historical move made it difficult for certain parties that sought to establish normal ties with the Zionist regime of Israel.

While declaration of a day in remembrance of Palestine drew positive reactions from many Islamic nations, enemies are trying to introduce Iran as hostile to Arab countries in order to put an end to the Quds Day and serve the interests of the US, he added.

The International Quds Day is an annual event during which demonstrators express their solidarity with the Palestinian people and opposition to the occupation of the Palestinian territories by the Tel Aviv regime.

The day is also seen as the legacy of Imam Khomeini, who officially declared the last Friday of Ramadan as International Quds Day back in 1979.

This year, Muslims around the world will mark the day on Friday, July 1.