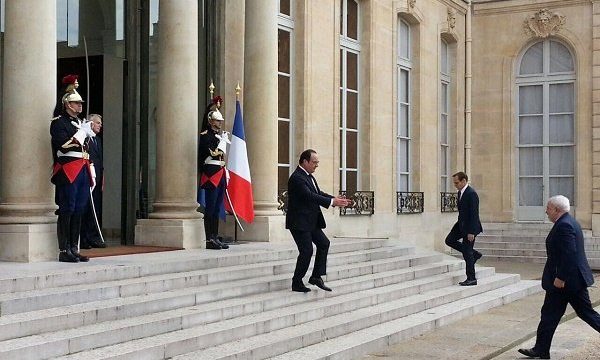 Iran’s Intelligence Ministry announced on Monday its agents have thwarted a major plot by the Takfiri-Wahhabi groups for several terrorist attacks in Tehran and a number of other provinces, with terrorists arrested and a large amount of bombs and explosive material confiscated.

Iranian foreign minister in his first day of Paris trip met and discussed with President of the Senate of France Gérard Larcher on Wednesday.

Leader of the Islamic Revolution received on Wednesday evening President Rouhani and his cabinet members on occasion of holy month of Ramadan.

Zarif in Tashkent to attend SCO

Leader of the Islamic Revolution Ayatollah Seyyed Ali Khamenei received families of defenders of holy shrines martyred in the fight against Daesh terrorists in Syria and Iraq.

Leader of the Islamic Revolution Ayatollah Seyyed Ali Khamenei has strongly criticized the revocation of the citizenship of a senior cleric in Bahrain, saying Bahraini youths cannot be silenced anymore.

Ayatollah Khamenei has told a group of families of martyrs that Iraq and Levant were a prelude to paralyze Iran, while they were paralyzed by the Islamic Republic’s power.

The government has announced a new ruling regarding certain imported cars.

The US State Department said it welcomes Boeing’s announcement of a deal with Iran Air, and that it involves the “type of permissible business activity envisioned” in the Iran nuclear deal.

French FM: Iran can be a great partner for France

Iran calls for facilitation of banking ties with Netherlands

The Boeing Co. this week offered further detail to a tentative agreement with Iran for aircraft sales, saying the proposed deal between the two sides would involve a mix of direct sales and leases.

Bahrain has revoked the citizenship of the country’s most senior Shia cleric, Sheikh Isa Qassim, a move which could further complicate the social unrest in the tiny Persian Gulf Arab state.

Foreign Minister Mohammad-Javad Zarif said on Wednesday that there are two diplomatic and military solutions for Syria, but the diplomatic choice should be taken.

President Putin: No obstacles for Iran to join SCO

Russian President Vladimir Putin says there are no obstacles left for Iran to join the Shanghai Cooperation Organisation (SCO), a regional security and economic cooperation body led by China and Russia.

Nasrallah says US sanctions have no impact on Hezbollah

Hezbollah Secretary General Seyed Hassan Nasrallah deplored a US sanctions law seeking to tighten the noose on the party’s finances, saying that the law would not have any financial impact on the movement.

Iranian space scientists have concluded research on the conceptual design of a homegrown manned spacecraft together with its carrier rocket, or launch vehicle.

Vice President and Head of Iran’s Department of the Environment, Massoumeh Ebtekar here on Tuesday urged Iraq to tackle dust and haze pollution.

To promote the tourist attractions and investment opportunities of Qazvin Province, the provincial office of Iran’s Cultural Heritage, Handicrafts and Tourism Organization has organized a one-day tour for the ambassadors and diplomats of over 40 countries.

‘I, Sajjad Qaribi, am an Iranian soldier’

A gigantic Iranian bodybuilder, weightlifter, and powerlifter has taken the Internet by storm, stealing his fellow sportsmen’s thunder with his jaw-dropping muscular bulk and self-effacing and patriotic attitude.