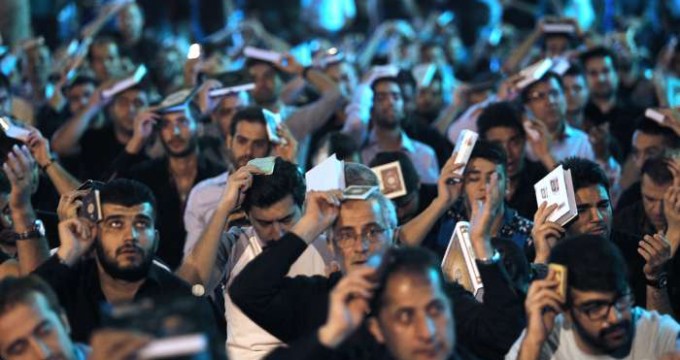 People from all walks of life gathered inside mosques and other religious sites nationwide on Friday night to mark the event, which is believed to be the night when the first verses of the holy Qur’an were revealed to Prophet Muhammad (PBUH) some 14 centuries ago.

The Night of Destiny is also thought to be the night when God decides the fate of everyone for the coming year.

Muslims recite the holy Qu’ran, hold vigils until dawn in prayers and supplications and ask God to forgive them for their sins. Muslims also have special wishes and prayers on this special night.

Iranian Muslims ask for divine forgiveness during the Laylat al-Qadr (Night of Destiny) at the Jamkaran Mosque near the city of Qom, central Iran, June 23, 2016.

Imam Ali was struck in the head with a poisonous sword by Ibn Muljam while he was saying his prayers in the Great Mosque of Kufa, which is located in Iraq now, on the 19th of Ramadan 40 AH (27 January AD 661) and passed away two days later.

Imam Ali, Prophet Muhammad’s son-in-law and cousin, is highly respected for his courage, knowledge and deep loyalty to the Prophet as well as for administering justice.

Imam Ali’s martyrdom, which falls on June 27 this year, is a national day of mourning in Iran.